The Park Loses Power
Last week somebody was trimming trees on Main St. in our Tiny Town. Apparently, they left the job half done when they left for lunch, and the thunderstorm that blew through finished the job. A de-limbed tree fell over in front of the school, taking the main power line with it. The entire village was out of power. The storm was magnificent, and this correspondent was not surprised to have the power go out. But when it did not back on within a few hours, we began to wonder what was going on.

We walked up the rain-soaked driveway, past the mailboxes, to speak with a gentleman in an orange rain coat who was re-directing traffic. He explained the situation (an amazing feat with that few teeth) and Jesse and I headed back home. “That’s it” I thought, “I’m definitely taking Mom up on her offer of dinner!” Though I have a gas stove, I was not looking forward to spending the rest of the day in a dim, cold trailer, even if we could still have a hot meal

When we drove home later that night, we watched anxiously to see if power had been restored. Main St. had lights – part of the way, then partway down our road, everything went black. A few windows glowed dimly with a candle or a flashlight, but that was it. My in-laws had power, but that’s probably due to them being right next door to the fire department. The trailer park was as dark as a cave. We got in the door, without the aid of our porch light, and Jeremy clicked on the flashlight he’d set just inside to have if needed. We got ready for bed with the help of a few candles and an oil lamp, reminding me of homestead days. We went to bed with no idea how long it would be before power was back up – my neighbor Jen had called the power company and they said it could be 24 hours.

The lights in the kitchen woke me at 11 – the power had been out for 7 hours. It amazed me how LONG it seemed, here in the park, when on the homestead, we regularly went for days without it! I was relieved I didn’t have to make homestead coffee in the morning, and rolled over and went to sleep. 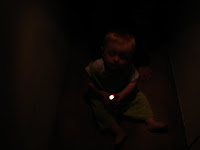 (Jesse with his own little flashlight)