Of Valleys and Mountains {All Is Grace, Part 4}

Did you ever wonder what happen to the Ethiopian Eunich after Philip disappeared into thin air?

I was thinking about him the other day. Wondering how he made out. I’m assuming he went home with his new-found faith and the revelation God gave him that day on the chariot, and life was different.

But was it different in a big way, like, he became an ambassador for Christ and brought revival to all of Ethiopia?

Well, that would certainly be what one would hope…but I wonder.

Maybe the difference was small at first? And maybe he struggled to keep the revelation when he returned to the land where he was the only one who had heard the truth. How long was it before he gained a companion to study scripture together and help him hold on to the revelation? Did he ever waver in his faith, lose sight of the revelation, or become complacent?

{This is the 4th post in the series “All Is Grace”. Catch the rest of the series here.}

Down from the Mountain

It’s really hard to come down from a mountain-top experience and retain the same vision that one had in the heights. Valleys are not nearly as fun as mountains. 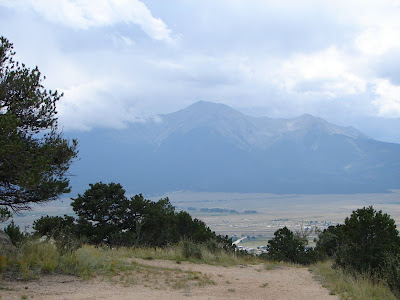 When I returned from that mountain-top time in NC when I was 21, I worked very hard to try to keep the vision. I continued to rise early and spend beautiful, soul-filling, sacred times with my Lord. But I was so new at this new perspective of God (a loving Father who accepted me just as I was) that when life happened, I had trouble keeping the vision. When a few days went by and I didn’t have time for devotions, I imagined He was disappointed. I imagined when I couldn’t hear His voice as clear as I had on the mountain, that I had failed Him and was receiving just punishment. And when I heard His voice again, I took the credit, as well. He was speaking to me because I’d been a good girl. I had once again fallen into a works-based relationship with my Father.

At 22, I began dating (call it courtship if the “d” word bothers you–revert back to dating if the “c” word makes you cringe). This was a challenging season that drove me to press in close to the God I knew was there, and He was faithful, speaking to me more clearly than He ever had before, graciously giving me clear direction in a season in which I’d have been lost on my own.

Then, 6 months into the relationship when dates had been discussed and a ring was right around the corner, the whole thing fell through. This was a time of deep disillusionment for me–it messed with everything I had believed about living by principles and what a life committed to God really looks like. I tried to wrap my mind around the startling idea that sometimes pain is a part of God’s plan, not something we that can be avoided if we follow all the rules.

It was a very dark time and I felt God was silent for many, many months. This confused me, because this was a time when I needed Him most! My pastor encouraged me that this was a season to hide behind the shield of faith. Being the obedient, rule follower that I was, I curled into a fetal position behind my very shaky faith, and I waited for the sun to come out again.

I didn’t understand why, when I needed it most, my faith seemed the least stable. But I had nothing else to cling to. I read and re-read the journal entries from the year before, documenting a time when God was so very, very real, and waited.

And gradually, I could breath again. And then I was able occasionally to smile. I went a whole day without crying, and then another. My Bible stayed open to the Psalms–I didn’t have the strength to venture beyond poetry, but found comfort in David’s passion-filled prayers and his determination to continue to praise God even when life was bleak.

I had made it through my first valley, and I had grown. I now understood some deeper truths about God and the walk of faith. I hadn’t enjoyed the valley, but I had survived it, and I knew it was by God’s grace.

The following year the Lord once again led me into a sweet, sweet season–one which washed away the last of the pain in a flood of joy–He gave me a husband, a place for my heart to rest, a companion, and someone whose love for me echoed the Father’s–expansive, unconditional, and a delight to revel in. I was once again enjoying mountain time.

In the second year of our marriage, our path dipped into a valley again–the journey detailed in this series about my anxiety disorder. Again, there was so much learned in the valley, but what a relief when what I learned about my worth before God was applied to my life–what joy, what peace, what splendid views as we traveled up to higher ground again!

And then another valley came…one I’m still challenged by, and thus cannot quite describe to you, valley-vision being so foggy compared to the mountain views. Doubts about my worth, my faith, and even my God were in abundance. I fought a fog of depression for two years, till a defining moment on a grey November day when I consciously made a decision to trust my future, as well as today, to the God who had held my past. 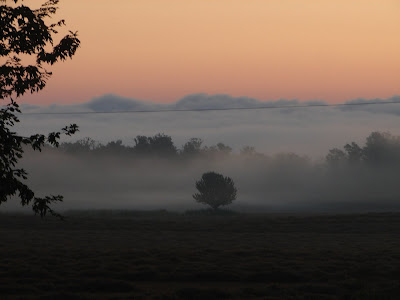 And I waited for the sun to come out. Waited for the view. Waited for revelation to come pouring in, for His voice to grow louder, for the bright lights and orchestral music that would indicate I’d made it through the valley and up to another mountain peak.

And they didn’t come. Life just went on. And without a trial bearing down on me, I was not motivated to press in to my Father. And without a mountain view thrilling me, I forgot the delights to be found in His presence. And with 3 small children, 3 meals a day to make and serve, a husband to devote myself, my plate felt too full for one more thing. So, I drifted along, occasionally wondering if this plateau was a good thing or a bad thing, but too busy or complacent to care.

My faith up to this point had been an up and down, emotional ride, with circumstances having the biggest influence on whether I felt close to God or not. I still had a very immature understanding of what it looked like to walk in faithfulness. I still had a lot to learn.

I didn’t know it, but what I needed was to be discipled.

If you hadn’t guessed by now, my Father had a plan for that, too.

Just curious…where do you see yourself on the faith journey? Mountain, Valley, or Plateau?