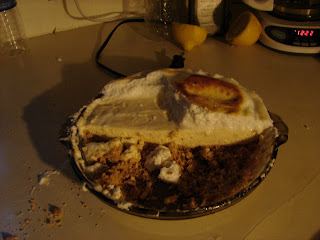 Today is National Lemon Meringue Pie day.
Jeremy loves Lemon Meringue Pie.
I had three lemons in the fridge.
I’m going on vacation.
I needed to use them up.
That is a real good list of reasons for an action. But I had a long day running errands and getting ready for the trip, so Anja and my friend Jen got assigned to the pie making. You should have seen the kitchen – small enough when there’s only one person in there, it was crowded as the two of them whirled around working to get this pie in done and in the fridge in time to cool for dessert.
Uh-oh, we don’t have time to make a lemon meringue! Hmmm, how about lemon chiffon? Sounds good – it’ll use up the lemons, and we can still put a meringue on top! Round and around they went, washing dishes and making them dirty again. Lee invented a double boiler with two pots and a 1/4 measuring cup. And Jen ran over to her house (she lives next door) and grabbed the cream of tartar she needed for the meringue. The egg whites were brought to room temperature, and the beater turned on high. And Jen beat and beat and beat and beat and beat and beat and beat and beat and beat and beat and beat those egg whites, but they WOULDN’T peak. She added more cream of tartar and beat and beat and beat – well, you get the point. So, finally, she brought it down to her mothers (she lives two doors down) and put it in her Kitchen Aid. Aunt May beat and beat and beat those egg whites, and SHE added more cream of tartar. Finally, the egg whites thickened enough to slop them on top of the pie, broil it, and pop it in the fridge.
Two hours later we got it out to finally eat our hard-earned dessert. Jen had the honor of slicing and serving. As she did, she taste-tested a little bit of the meringue and yelped!
“Ohhhhh! this tastes awful!!! It tastes like a cross between sand and cat litter!!!!” She started scraping it off each piece, deeming it inedible.
I thought it couldn’t be that bad, so I grabbed a bite full –
“EEEEWWWW! I’m scarred for life!” I cried as I spit it into the sink.
“What happened???” We all wondered.
“I think it was too much cream of tartar” I said (though I hadn’t been in the kitchen at all) Jen continued to scrape it all off as we wondered what could have gone wrong. Suddenly Jen had an idea.
“Maybe I put the wrong lid on the Horseradish Powder…”
“What would that have to do with anything?” We asked.
“Horseradish Powder and Cream of Tarter look the same, and I have them in the same container….and I used them both last on Memorial Day…That’s gotta be it!”
We all groaned and laughed as we realized the truth – and the reason the meringue wouldn’t whip – we had put Horseradish Powder in the egg whites!
“And me a Pampered Chef Consultant!” Jen cried.
The moral of the story? Don’t make deviled eggs and Chocolate Meringue Pie at the same time!