In Which We Go Exploring and Find a Waterfall

Sunday, for Jeremy’s birthday, we went for a drive together. It was our first outing as a couple after Seth’s birth. Of course, we took him with us. He’s rather addicted to his mommy (and she to him). (The other two childrens went to Grandpa and Grandmas) We decided to drive all the way around Cayuga Lake. (We live in between the two largest finger lakes – 40 miles long and only a few miles wide, they, and their smaller fellows, run North and South in Upstate NY, cutting through the land like giant fingers…thus the name) We had been around Seneca several times, but not yet completed a loop around Cayuga. So, we headed North, enjoying the beautiful blues of sky and lake, agreeing this was the perfect thing to do on a sunny, but slightly chilly afternoon. 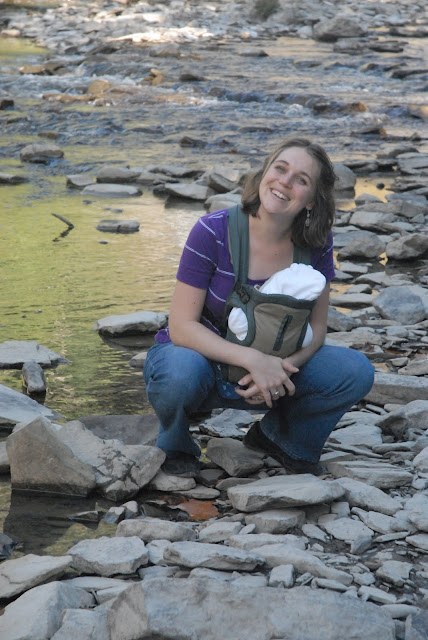 We drove around the top of the lake, then headed south again, now taking in views of the opposite side of the lake – un-explored territory for me, though Jeremy gets over there occasionally on service calls. For me it was kind of like walking on the moon – I see that side of the lake in the distance every time I pull out of my driveway and whenever I am running errands. Now I was there, looking back at here. It was cool.

We neared the bottom of the lake, and were crossing a bridge when Jeremy let out a gasp. Those who know Jeremy understand how hard it is to get a reaction out of him – I knew this was something big! He slowed down and turned around in the next driveway, taking us back to a small parking lot. We took the boy child out of his cozy car seat and tucked him into his cozy carrier, and headed over to the small trail head that lead into the woods. Climbing carefully down a rocky path eroded between boulders and old cement pilings, we reached the river bed below the bridge. Continuing to follow the little path through the cool green shadows and smooth river stones, we came around a bend and – I saw a glimpse of a waterfall. A really big waterfall. Like, a “How did I not know this was here?!”-size waterfall. Now I knew why Jeremy gasped. 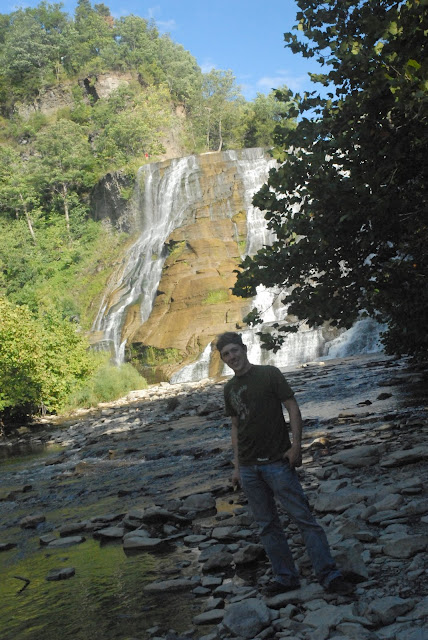 Suddenly, I thought of Kansas. Prompted by the thought of two friends at that moment on a road trip that would take them through Kansas, I marveled at what a beautiful place I live. Where you can drive along and just ‘discover’ a waterfall you didn’t know existed.

I am sure that never happens in Kansas.