How My Husband Quit Coffee {without a single headache!}

Stories of my husband’s forays into the crunchier side of life seem to be pretty popular around here, so I thought I’d tell ya’ll about how Jeremy recovered from caffeine addiction and adrenal fatigue. 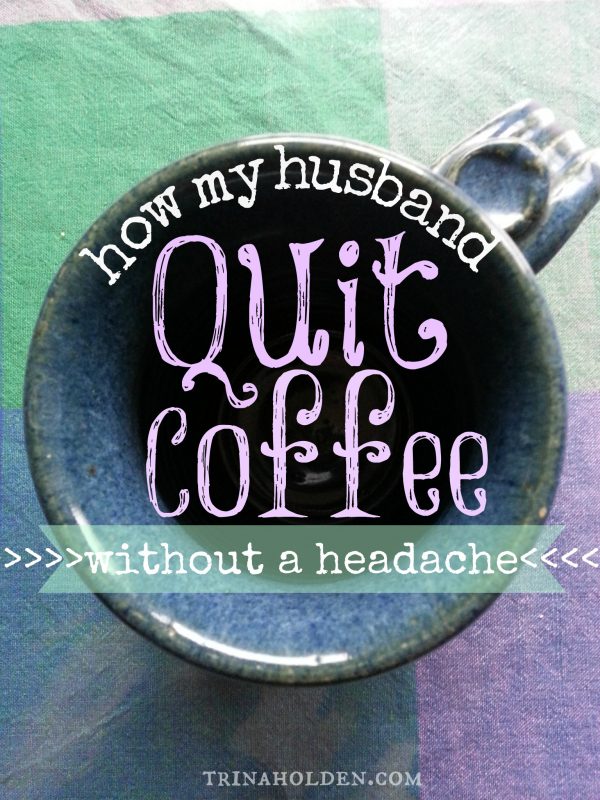 {Just so we’re clear on this–it’s not a story as in ‘fairy tale’ – this is an honest-to-goodness real life account! I like to share this stuff in story form because I’m not a health professional and don’t need the liability of anyone taking my words as diagnosis or treatment of anything. I just love to tell stories that might inspire you on your Real Food Journey. Also, this post contains affiliate links which is how we keep the lights on around here. All clear? OK, here we go!}

When I met Jeremy he was a caffeine addict who’s favorite fix was a deep mug of coffee, with a cold can of Pepsi taking a close second.

It was enough to make a crunchy gal think twice about matrimony.

However, some wise person must have made some impression on me at some point in my youth, because I decided from the start that our relationships with food would not come between our relationship with each other. He ate his junk. I took my supplements. He ordered curly fries, I ordered a salad. We were a classic example of opposites attracting.

And this was just the beginning. After we got married, Jeremy continued his ‘drinking habits’, while I got crunchier and crunchier, even publishing a real food cookbook. He fully supported and helped me with the book because he loved almost everything I cooked–he just liked his Pepsi on the side! I occasionally mentioned that I was concerned about the long term affects of his caffeine addiction, but most of the time God gave me the grace to bite my tongue.

Not harping on it was one of the reasons I think he was willing to listen the day he came to me and said,

“I’m tired of being tired all the time.”

Being chronically tired is a classic sign of adrenal fatigue. No matter how much sleep Jeremy got, he never felt full of energy. His morning coffee got him going in the morning, but by mid afternoon he needed another caffeine fix, and by 8pm he was beat. If we stayed out late, it took him 3 days to recover from the loss of sleep.

From my studies, I knew that constant caffeine intake overstimulates the adrenal glands (the hormone that fuels our ‘fight or flight’ response to stress) causing our bodies to become so depleted that we have no natural energy and must use more caffeine just to get through the day.

I broke the news to my husband with a huge grin on my face, “You have adrenal fatigue!” I was excited because I could tell he was at last ready to do something about his caffeine problem, and I knew exactly what to do.

See, I’d just read Cheeseslave’s article about  how she quit coffee (and wine and chocolate) without any withdrawal symptoms by supplementing with amino acids.

(Quick chemistry lesson: Amino acids acids are the building blocks of neurotransmitors, which in turn are what feed our brain the substances (like endorphins and serationin) that we need to function and feel mentally well. That’s why addictions aren’t always a moral failing–they often have to do with brain chemistry and a deficiency in the chemicals our brains need to function well. OK, I’m done now!)

How He Quit Coffee Cold Turkey

We didn’t have the resources for testing which amino acid Jeremy was most depleted in or for taking them in supplement form, so I decided we’d take a chance that he wasn’t too terribly depleted and we’d be able to address his nutritional deficiencies with (you guessed it) real food. Although protein is a great source amino acids, I’d read in this book that high powered blending can break down and make various amino acids available even from vegetables, so I decided a big, fat, smoothie would be how we would supplement his diet.

The next morning, for the first time in 7 years of marriage, nobody made a batch of coffee. Instead, I threw a whole bunch of goodness into my blender and served my man his first ever breakfast smoothie.

He drank it all up.

And he didn’t get a headache that day.

No More Headaches (and a new husband!)

Normally, if he missed his morning coffee, that was  a recipe for a serious headache by lunch, and a nap before dinner. That’s why I’d faithfully made his coffee for him for 7 years because he really did need it. But he didn’t get a headache that day, nor the next, nor the next. I just kept making him a nourishing smoothie each morning, and he kept feeling fine.

Gradually we saw the symptoms of adrenal fatigue fade and within 3 weeks, I felt like I had a new husband. For the first time in our marriage, he was capable of verbal communication before breakfast! It was a well known fact among family and friends that you couldn’t get Jeremy to talk before 11am, but now my husband could wake up in the morning without the crutch of caffeine. We could have meaningful conversation before he left for work, instead of having to wait till he got off in the afternoon!

I was one happy woman.

Jeremy has now been free of caffeine dependence for 2 years. He still loves his Starbucks Carmel Machito Latte Frappicino Whateveryoucallit, but it’s a treat instead of a necessity. And we still do a smoothie at least 4 mornings a week.

He also eats breakfast with us more often (he rarely ate breakfast before–no surprise, since coffee suppresses appetite) which makes my heart happy because I like everyone I love to eat 3 square, nourishing meals a day. (Check out our favorite real food breakfasts)

He and I both love the new Jeremy, with his sustained energy levels and ability to recharge with just a single good night’s rest. Adrenal fatigue is no fun, and we were grateful that he was able to recover from it so quickly.

I feel that, just as in the case of healing his cavity, the fact that Jeremy was already on a nourishing diet helped us to see very swift results with a relatively small tweak to his diet. If you are struggling with adrenal fatigue you may need more than just the addition of a good smoothie with breakfast. But it’s certainly a great place to start! (Here’s more info on adrenal fatigue and amino acid supplementation.)

Here’s a what a smoothie contains at our house on a typical morning:

makes enough for large glasses for Jeremy and me, and a smaller cup for each of the 3 kids who are of smoothie drinking age.

Throw it all in the blender and blend on high for about a minute, or until you can’t see individual bits of anything. 😉 (I use and adore my Vitamix Blender for this, but you can make a pretty darn good smoothie with whatever you got on hand. You may just have to chew a bit ;))

The fruit is for sweetness, the kefir provides protein (and live cultures for our guts), the eggs and seeds add even more protein, the coconut oil has so many benefits (including making sure the smoothie doesn’t hit our blood stream to fast and give us a sugar high and subsequent dive) and the water makes it thin enough to drink through a straw. If I only have fresh fruit on hand, I add a couple ice cubes ’cause Jeremy likes his smoothies cold.

So, our experiment in healing adrenal fatigue with real food was a success! If you are ready to see what changes real food could have in your life, but don’t know quit where to start (it can be so overwhelming–I know!) the check out the Real Food Journey series I wrote just for you.

Have you ever experienced adrenal fatigue? Is coffee (or chocolate, or something else) a crutch or a treat for you? (I admit that though I’m not a coffee drinker, I do resort to chocolate on stressful days! I should probably just make myself a smoothie when I feel that way, huh?) What do you put in your smoothies?