When Your Art Feels “Ridiculous”

The other day Jesse came up to me with a solemn expression and made this confession:

“Mom, sometimes when I’m in the bathroom by myself, I make up little songs but then I say ‘That’s ridiculous!’ to myself. And I stop.”

Because this boy lives in a home that values creativity and celebrates all artistic expression, I cannot fathom where this critical response to his song-making came from unless it is the very enemy of his soul sowing lies in order to halt the progress of a would-be worshiper.

Though I was in the middle of cooking supper, I felt this was a crucial moment in my boy’s life, and the Lord prompted me to squat down and get eye level straight with him and take the time to root out these lies and replace them with some deep truths I’ve learned about art.

How even if your art is not ‘perfect’, the effort is a worthy act.

How we must practice our art, and even the clumsy beginnings are important.

I asked him if he thought his favorite Go Fish Guys wrote perfect songs when they were seven?

I asked him if it was ‘ridiculous’ for Lydia to reach for her toys, when her hand eye coordination is so imperfect?

And then (because words of affirmation are my love language and I was bursting with love for this little boy and because I’d gotten on a roll) I told him that I think he’s got talent in this area. I reminded him of how delightful his Chick-fil-a theme song was that he had composed that very afternoon. And I informed him that he has been writing songs since he was three and a half. 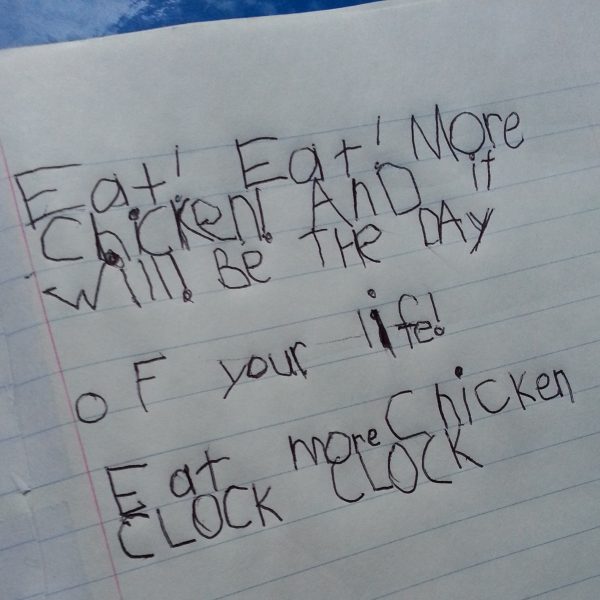 I went to find his journal and we spent the next half hour in fits of giggles over the funny things he said and did when he was a young boy and finally I found the page where I’d recorded his first song.

“Just 10 days after he first learned to sing, Jesse composed his first song:

His eyes were filled with wonder, a satisfying change from the shame and confusion I’d seen when he made his confusion earlier.

Oh, Lord, protect my boy from lies and fears that try to keep him from living his art and doing whatever it is that you made him to do!

To read about my little system for writing down the precious and hilarious things my kids say, you can visit this post published on Passionate Homemaking a few years ago. And if your art feels ridiculous, well, you need to read Emily Freeman’s book, A Million Little Ways. I’m still chewing on it, you can read the review I wrote of the book last fall.