From the Costume Closet

Here is some eye-candy for those of our readers who enjoy historical clothing. I made this regency dress the year before I was married. I made the spencer jacket and bonnet the following winter. I wore this to Church several times before I grew out of my outfits during pregnancy. Now that Jesse is weaned, I should get it out and wear it again! It is both comfy and warm. 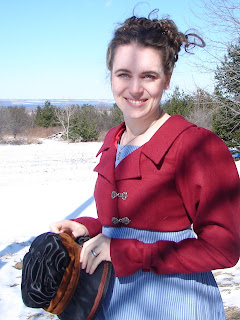 “The spencer, a very short-waisted jacket, was worn with the Empire dress. It was invented by Lord Spencer, who claimed that fashion was so absurd that he himself could concoct a ridiculous, impractical style and it would become the ‘rage’. He cut the tails off his own coat and went for a stroll. In two weeks, all London was wearing the ‘spencer’, and soon fashionable men, women and children of the Continent and the colonies were wearing the same little jacket.”
-“The Mode in Costume”, R. Turner Wilcox
(incidentally my favorite costume reference book)

Kinda reminds you of today’s fashions, doesn’t it? 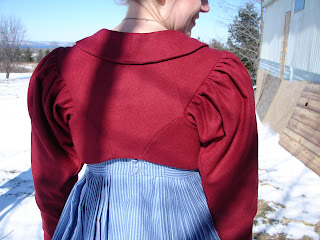 All the details of the dress and spencer are historically authentic. The dress is my own design, the spencer is from Jennie Chancey’s pattern. The cape is copied after a cape in “Costume Close-Up”, c. 1700’s. 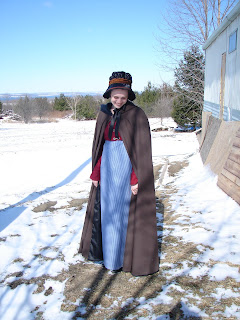 The hat is also my own invention, for which I have created a short tutorial. Would anyone be interested in a bonnet tutorial?
Let me know if you are – they are fun and fairly easy. 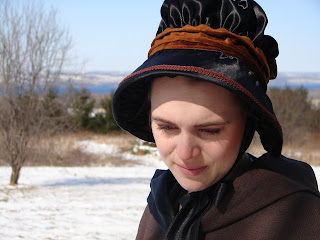