Trina vs. The Bat

Well, of course a bat would come on the one night Jeremy was gone!!! And I couldn’t freak out ’cause I didn’t want Jesse to get scared. And he didn’t – he just lay in his bed casually watching is mother flail a towel around the hallway, while educating him on the nature of nocturnal animals.

I think he flew into the new bedroom. I shut the door and put a  broom by my bed stand.

The Bat came back. I was just drifting to sleep around 11 when I started hearing noises again. Telling myself it was ‘just a bat‘ did not help! Try as I might, I could not ignore the thumps and flaps (which were loud enough that it sounded like an intruder was in the house) and my heart rat climbed as my eyes stayed wide open, watching for the intruder.

I tried to formulate a plan of attack, but for some reason I was terrified of facing this on my own. Finally I called Jeremy. I felt so bad, calling him with tears in my voice, when he was too far away to do anything for me. As it rang, I thought of my [brother in law] – he could rescue me [he lives only 5 min. away and would still be awake]. For there I was, having closed my kid’s doors and my own to keep The Bat out of our bedrooms, but knowing I would not be able to sleep with that noise, and terrified about going out there and doing battle myself.

Jeremy was still awake, and he agreed that calling Micah would be a good idea. So, I did, and he was awake, but was not home. He wished me luck and I let him go.

I pulled on my heavy, extra large, Eddie Bauer bath robe over my P.J.’s and cinched it tight above my belly. Then I grabbed the next piece of clothing handy – a nightgown – and tied it securely around my head to protect my hair. I armed myself with the broom and cautiously opened the door. The Bat chose that moment to come barreling around the corner of the hallway and past my door, right at face level – I jumped back into my room, sobbing and shuddering. But the deed must be done, so I collected what little wits I had left and set forth again.

I got the window pane out by the time the bat flew down the hall again.I stifled a shriek and coward behind the glass, determined to use the window as a weapon if he came close enough. He swooped back down the hallway and I reluctantly turned my back again to get the screen out. Gripping the screen in in both hands, I retreated down the hall to the stairwell and waited for the animal to return.

It was just like on those scenes in a  book, where the hero waits in ambush, the only sound his wildly beating heart – except in this case the hero was a whimpering, 8 month-pregnant woman with a nightgown wrapped around her head.

Let’s see – how do they say it in books? Oh, yes – “After what seemed like hours” – I heard The Bat squeak – or whatever it is that they do- and it came flapping down the hall again, round the corner, and straight for the open window.

It hit the windowsill.

This was a dumb bat. Maybe his echo-locution system was out of whack from the towel swipe I gave him earlier?

He recovered and turned to fly down the hall again – straight toward me! My moment had come – I held the window screen high and made solid contact with The Bat as he careened toward me. He was down! But was he dead? I looked for my broom to finish the job, and realized I’d left it by the window. The Bat was between me and my weapon, and he was crawling toward me! I whirled around, desperate to find another weapon, spotted the shop-vac. I grabbed the 4 ft. extension nozzle and turned to face my enemy. A few solid hits and it would all be over. But the very thought of making contact with The Bat’s soft, dark form, it’s beady eyes staring at me, even with 4 ft of plastic between, made me shudder. I couldn’t even look at the thing as it continued to crawl down the hallway, so I focused on the wall just behind it and took aim.

I did not even care anymore about waking the kids, but flailed my weapon at The Bat’s little body 6 or 8 times, reminding myself that bat blood on the carpet was better than bat wings over my head.

His body was limp. I assured myself the worst was over, and carefully scooped the soft clump of brown fuzz (“and claws and freaky little vampire teeth” I imagined – remember, I was refusing to focus on the creature) onto the corner of the screen with the nozzle and dumped him out the open window. Half a second after I committed his body to the open space of the second floor window, a bat flew by in the light from the hall lamp. Was it a second bat, or mine back from the dead? I didn’t wait to ask, but frantically fought with the screen and then the glass to get the window shut up tight.

It took me nearly an hour to recover. I was shaking and practically hysterical with relief – and self pity that I had had to endure something so awful while home alone. I told myself I was being a wimp – that I had faced bats before and never had this kind of emotional collapse, but this time I was home alone, pregnant, beyond over-tired, and I had two children to protect. A phone call to Jeremy to tell him, through my sobs, that I had killed The Bat and was fine, really, and 20 more minutes losing myself in a book until my heart rate slewed, and I was ready to turn out the light. Sleep came sometime after midnight. 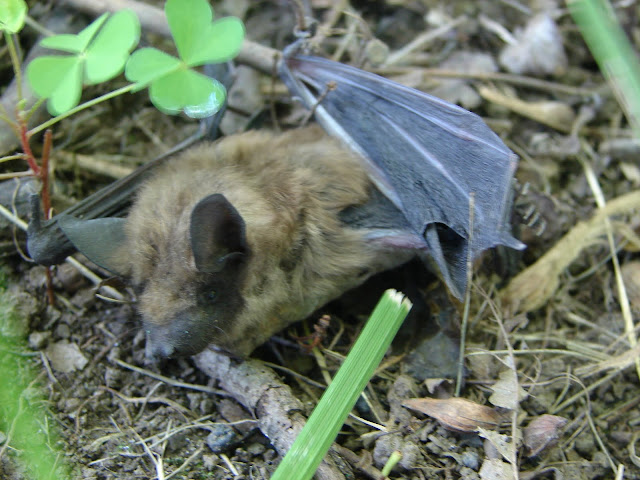 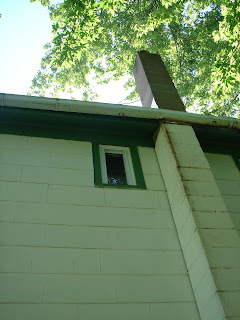 (The Bat and the upstairs window in the light of day)

This morning, first thing, I went out to see if I could find the body of The Bat. Sure enough, there it was, a tiny little rumpled clump of furry skin and bony wings. So, the bat I saw fly by the window must have been a second bat, perhaps answering his friend’s desperate squeaks. I put aside my revulsion and brought Jesse out to show him what a bat was, and even took this picture for you. Forgive the long post – I believe it was therapeutic for me!