This month in my kitchen. 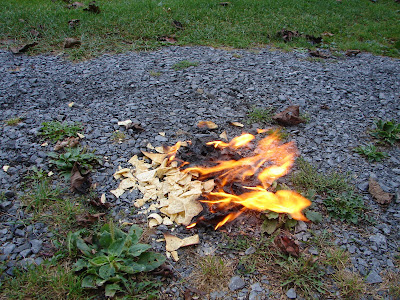 Okay, well, this photo isn’t from the kitchen, because it’s not safe to have open fire in the kitchen. This is what happens when the bowl of chips you put in the toaster oven is mounded too full. You only planned on toasting them, but instead, they caught on fire. Thankfully Jeremy was home rescued me by running the bowl outside and dumping in the driveway, where it continued to burn for a good 15 min. (did I mention it was Prevent House Fires Week?) 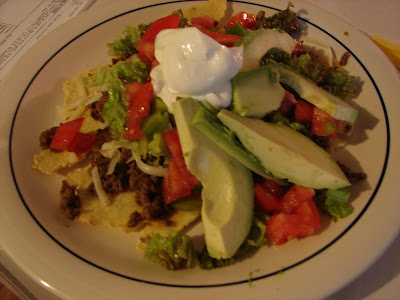 So, what to have for dinner? The plan was taco salad, but that was the last of the chips. Hating the idea of going out to the store (I’d been gone all day already), I quickly mixed up some cornmeal, flour, water, salt, and a little bacon grease (yum!) and plugged in my tortilla maker. I know this is the wrong way to make corn tortillas. That’s why I didn’t call them that. They were a cross between corn pone and corn chips and they were edible. In fact, the resulting salad (with my homemade corn-somethings crumbled underneath) was really yummy. We may make them again. 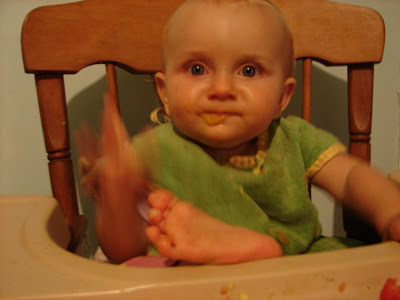 Just a picture of Claire for fun. This is her favorite spot. She likes to invite her feet to the table. She gets it from her mother. I can still remember my mother scolding me – “Who invited your knees to the table?” LOL
Unlike my firstborn, who just didn’t like to eat – even if he was hungry and liked what was on the menu, this child is like a living vacuum cleaner. It’s actually quite delightful. The challenge is coming up with things to satisfy her voracious appetite. I don’t usually give my kids wheat until they’re a year old (introducing grains too early has been linked to food allergies) so her diet is mostly veggies and fruit, with her first meats and cheeses added in this month. Oh, and yogurt. Lots, and lots of Homemade yogurt. And I found the other day that she likes rice – I cook mine using the soaking method, so I trust it’s not too hard on her digestive system. She gobbled it up – she especially loves finger food and helping herself. 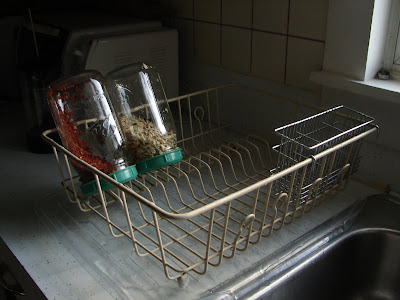 And last, and perhaps least to YOU but certainly not to ME – see my new dish drain tray? It’s a little hard to see ’cause it’s transparent (love that!) I finally found the drain tray of my dreams at Bed Bath and Beyond. I thought one this big didn’t exist – I really needed a big one to accommodate the giant dish drainer I got at a thrift store. I checked several places, but nobody seemed to make them this big anymore. But BBB does! and they had them in three colors! I got the clear and I like the understatement it makes. That’s sunflower and broccoli seeds sprouting, just so you know. I like a drainer big enough to do a mountain of dishes, and accommodate whatever experiment I’m trying at the time. 🙂