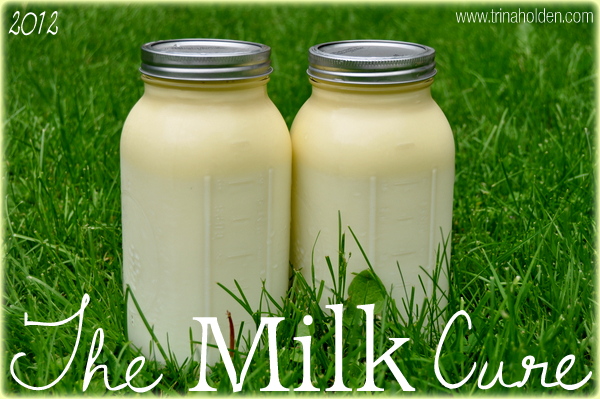 I officially started my milk fast on Tuesday morning. It was kinda a last minute decision. Monday night, as I was gathering jars to fetch our weekly 3 gallons of milk, I thought again of how I’d wanted to do this fast, and looked at the calendar to see if the next 7-10 days might work. Yeah, it looked like now was as good a time as any, yet I was a little chicken.

So I called my friend, Claire. She’s my support and mentor in all things nourishing. I’d planned on doing it with her, and today I was feeling slightly incapable of doing such a crazy thing on my own.

“Do you still wanna do the Milk Cure with me?”

I couldn’t believe it – she was in, at this short notice! And we were starting tomorrow. Gulp.

I went and fetched 4 gallons of milk, then came home and read every post on Healthy Home Economist’s site about their milk cure. I also made a batch of cookies, as I knew this would be my last chance to have chocolate for the next week.

Claire texted me, “What, U mean no chocolate milk?!”

I texted back, “Um I don’t think that’s allowed! lol just read all the posts. u can supplement with tea and Kombucha.”

“You better be! You’re my moral support! lol”

This was it. We were committed. What would tomorrow hold? Would we have enough energy to cook and care for our families? Would we get sick of milk? How would our bodies respond?

Day One—“This is Fun and Yum!”

I woke at 6:30 and poured a glass of milk so it could warm up a bit. It was recommended you let the milk come to room temperature so it’s not such a shock to your system. I didn’t fancy drinking all my milk at room temperature, but I figured it would be a nice touch for that first glass of the day.

It was delicious. Oh, my word. So creamy, flavorful, and satisfying. I thought, “I can totally do this.”

For the rest of the day, I drank a pint of milk whenever I got hungry, usually every 1 1/2 to 2 hours. I also drank water if I was thirsty but not hungry. I had to run an errand with Jeremy before noon, so I grabbed some snacks for the kids, and a half gallon of milk for myself and hopped in the car. I wrote and sipped milk while my kids played at the park. I felt wonderful—energy was normal, and my blood sugar stayed stable as long as I kept drinking milk.

In the evening I made sure to take a detox bath with Epsom Salts and Baking Soda—something I learned during GAPS: When you’re detoxing, soaking baths lessen the negative side effects like fatigue and headaches. I had a final glass of milk at 9:30, bringing my total intake to 1 gallon and 3 cups.

I spontaneously decided to join friends for a trip to the zoo on Wednesday. I was a little concerned that detox symptoms would set in, or that yesterday was just beginner’s luck and I might get really tired or something. Packed a lunch for the kids, and 3/4 of a gallon for myself, and off we went. We had a terrific day.

{Well, except for that part where I literally drove in circles around downtown Binghamton, lost as a goose, and I had to call my husband (who was 1 1/2 hours away in Syracuse) to use his smart phone to navigate me through the maze, street by street. I could blame low blood sugar, but I’ve always been a terrible navigator. The fact that I was ready for another glass of milk and I really needed a bathroom just exacerbated my problem.}

I was frankly amazed at my energy—I didn’t feel like I was on a fast at all. I was kinda waiting for the ball to drop, though, expecting Day Three to be when I would really start to detox, as Sarah had. Finished up over a gallon again that night, and slept peacefully.

So, I think I started detoxing on day three. The only indication I have is that I had a bit of mucus. When I say a bit, I mean, I had to blow my nose once in the morning. A lot of people are concerned with the mucus-producing affect of cows milk. In my own experience, since we switched to raw milk a few years ago, I and my husband have not struggled with the excess mucus we experienced on pasteurized milk.

Mucus is part of our body’s elimination system. When we have an increase it’s often the body’s attempt to flush out toxins. The gals over at Healthy Home Economist experienced an increase of mucus around day 3—said it felt like a cold coming on, and then it promptly cleared up. I experienced the same thing yesterday—sneezed a few times in the morning, blew my nose, and wondered if I was coming down with something. By bedtime I was feeling so good, I realized I wasn’t getting sick, but simply detoxing. The mucus is fine and clear, no sign of infection, and is simply my body draining toxins.

{If you have a lot of mucus when you’re drinking cows milk, it may be a sign you need to do a major cleanse and change your over-all diet. After you’re body has cleansed and your gut healed, you may be able to reintroduce cows milk with no side affects. Meanwhile, goats milk, or culturing your milk into kefir before drinking it are both great alternatives. But, don’t take my word for it. I highly recommend seeking a naturopath or kinesiologist to guide you if you have significant health problems.}

I continue to be amazed at the energy I have, and my friend Claire is experiencing the same thing. She took an hour long walk yesterday. I did some heavy gardening for 45 min. on Tuesday and had great stamina. We’re excited that we’re able to maintain our normal activities while giving our bodies such a great boost.

“Indeed we had a number of patients who took the treatment for “beauty treatment.” The tissues become firmer and the general appearance is markedly improved.”

How long am I doing this? It depends. 10 days was what Sarah and her friends did. I feel like I could go 10 days, but I’ve got some stuff happening next week that makes me think I’d like to finish up on day 7. Another factor is that I just got off the GAPS diet—I don’t feel like I’m in need of a major cleanse. My body’s not acting like I’ve got a lot of toxins built up, so I think 7 days will be sufficient for me.

Can you do this fast while nursing? Um, I need to look into that more. I just finished nursing Seth Franklin, so I wasn’t thinking about that, but a few of you have asked, so I’ll see if I can come up with some more info.

I’ll be back after the weekend to update you again. Happy Memorial Day, everyone! Enjoy that burger for me, will ya? Thanks 😉

What do you think? Have more questions? Are you thinking of doing this fast yourself? Do you need to find a raw milk source first? I recommend prayer. That’s how I found mine. 🙂 And you can check out this post — How to find your own source for Raw Milk.