I have just got to tell you how smart my boy is. 🙂 we have been working on sign language for about two months, as a way to allow him to communicate with us before he learns to talk. (read about our beginnings here) He has caught on so well, and now has 10 signs in his vocabulary! I always thought that sign language for babies was a cool idea, but until I tried it myself, I had no idea how fun and beneficial it could be! Jesse regularly tell us when he is hungry, thirsty, or wants to be held without whining.Here are examples of where a sign has replaced a whine, allowing him to communicate without developing a whining attitude…

Time to Wake Up!
First thing in the morning, and after each nap during the day, he wakes up so cheerful – singing or banging on the wall alerts me that he is awake – and as soon as I walk into his room, he stands up in his playpen and pats his head – the sign we chose for “up” – grinning from ear to ear. 🙂

I’m Hungry!
I will be busy rushing around the kitchen, mixing the salad dressing, stirring the soup, monitoring the bread in the broiler. Jesse is plodding around the kitchen, spreading tea towels all over the floor (he is allowed access to this one drawer, and always joins me when I’m in the kitchen). Suddenly it occurs to me that he must be getting hungry, and I should scoop some soup for him so it can begin to cool. As if reading my mind, Jesse looks up to me and silently signs “eat” by putting his fingertips toward his lips, assuring me that he is, indeed, hungry. I snap him in his high chair as he wiggles with pleasure in anticipation of getting his belly full.

Milk, Please!
It’s the middle of Church, Jeremy has just finished the last song, and Jesse begins to stir in his stroller where he’s taking his morning nap. I see his eyes flip open, darting around taking in his surroundings. Then a quiet grunt as he pulls himself to a sitting position. He looks around, makes eye contact, and immediately begins folding and re-folding his little fingers into tight little fists – the sign for “milk”. Without a sound to disturb the service, I pull him into my lap and begin nursing him.

It usually takes him about a week to begin using a new sign without prompting, though, depending on his mood, he will imitate the new sign immediately upon its introduction. Such was the case with “eat” – first time I showed him “eat”, he copied me perfectly, but it was a week before he used it on his own. Now he uses it all the time, even creating his first ‘sentence’ just the other day – “Eat, More!”

He is a most delightful little boy. I look forward to teaching him more and more signs so that he has ASL (American Sign Language) as a second language! Although, Jeremy tells me, since it was the first way he learned to communicate, ASL will be his first language, and English his second! Yes! I always wanted to have bi-lingual children! 🙂 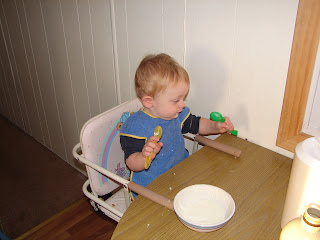 Here is the child trying to decide whether he is ambidextrous.