In the Holden household, when you turn 7 you become a Paige – the first phase in becoming a knight.
I was first introduced to this tradition 5 years ago when the Holden’s asked me to create a costume for Isaiah. On a medieval style tunic I embroidered the family crest – little knowing it would be my family crest someday! 🙂 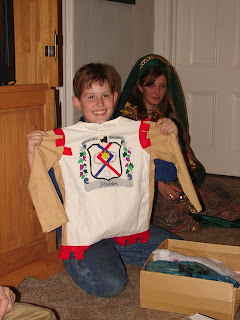 Isaiah holding up his tunic, which no longer fits, but is kept in a special box with the rest of the outfit.

Last Friday we joined Jeremy’s family to celebrate their youngest son’s arrival at this important milestone. His sisters had made him his own Paige outfit. He is now an official ‘servant of the ladies’, joining Isaiah in opening doors, carrying loads, and assisting with a willing heart in whatever task is at hand. Let me tell you, it is a real blessing to have these boys around! 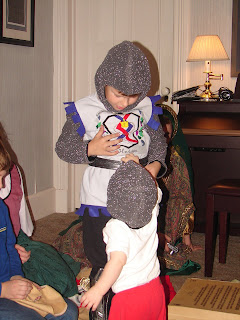 Here’s Nathanael in his new costume, and Jesse examining it with maybe just a tiny bit of envy. 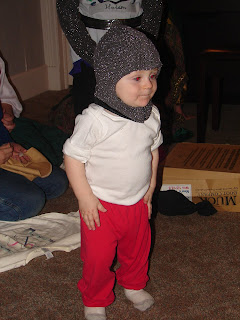 Thankfully, his aunties had made an extra hat out of the chain-mail-like fabric, and our little boy was quite pleased with himself. 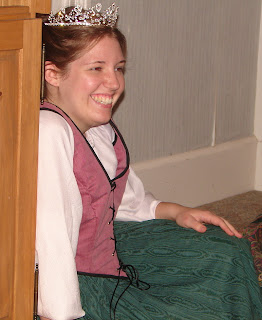 We didn’t need much of an excuse to all dressed in our renaissance outfits. We had a group picture taken with all of the siblings, but my camera ran out of batteries. Together we represented the whole spectrum of stages in maturity, from Jeremy (with his sword he received when he was knighted at 21), to Micah (at 19 he is a ‘squire’ – a servant of men, and has a shield), and the girls. Elise and Joanna each have a promise ring that identifies them as daughters of the King, and Joanna has a tiara which she received on her 21st birthday. I will try to post that picture when I get a copy.