The Secret to Great Pasta Sauce

My friend Claire revealed to me the secret to great pasta sauce – actually, she simply served me some leftover spaghetti and I demanded the recipe! She said that her home canned tomatoes were the secret to great flavor, and adding tomato paste was the solution for runny sauce. 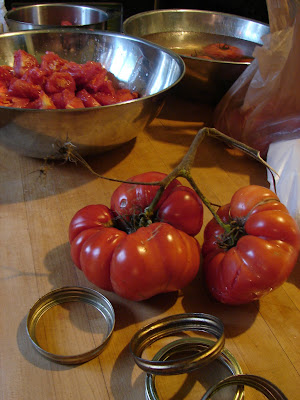 So, when two bags of tomatoes mysteriously appeared at my door the other day (found out later they were extra bounty from our new neighbors), I knew exactly what I was going to do with them. 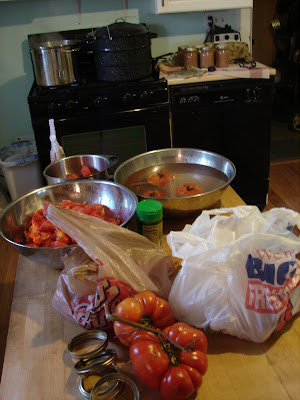 Look at the size of the tomatoes! They made lovely sauce, which we enjoyed on top of homemade meatball subs. And 6 jars of raw pack tomatoes reside on my pantry shelves for future feasts.

And, yes, to those who are wondering, that is my new butcher block island in the center of my kitchen! I got a 30 inch by 4 foot hunk of butcher block on Craig’s List. It is currently straddling a few low bookshelves until I find a base for it – which I plan to paint the same darker teal of my ceiling. So exciting. My kitchen now ‘flows’ and I feel so at home to be baking and cooking on top of butcher block again.