It’s time to show you our finished deck! If you follow me on instagram you’ve seen some glimpses of our deck project, which we fondly called our #redneckdeck because it really did have very rustic beginnings. Today I’m gonna give you the whole story…

Last November we moved from Upstate New York to my in-laws mobile home park in Alabama, and put a double wide on an undeveloped lot. Things like electric, sewage, and phone lines took priority (imagine that), so we didn’t have much in the way of a front entrance for the first 6 months. This was the front of our house this spring… 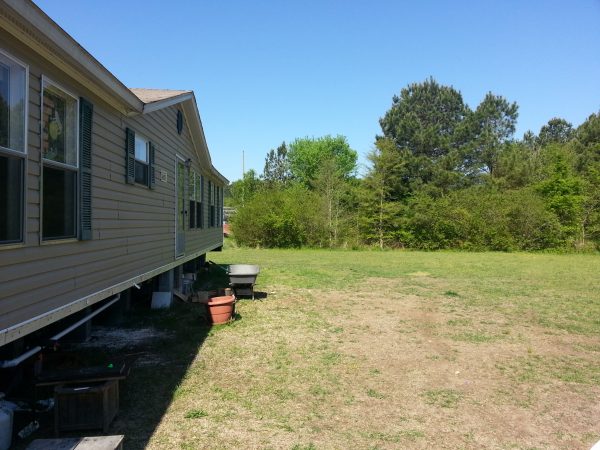 (We kept the door locked so the children didn’t fall out of the living room. Obvs.)

When we originally bought this place and planned its situation on our lot, we put the front of the house facing the quiet, more private back end of our lot and planned to build a generous porch for more room for hospitality and the ability to be out of doors without the bugs carrying us away. We hoped to make it as wide as the middle section of the house, and extend out 20 ft. or so. We could just see it in our minds, and could hardly wait to have that space, but we couldn’t afford to begin that project quite yet.

Then, one balmy spring day we were taking an evenings stroll to through the trailer park (not the most picturesque place to promenade, but it’s what we have. You make do with what you’ve got, and it can be quite…interesting.) We passed by one of our tennants who’ve we’ve made friends with and saw they had a brand new deck on the front of their single wide.

Well, “New-to-Them” would be a more fitting description. Bobby had been doing some work for us in the park, tearing down old mobile homes that needed to be replaced, and had seen opportunity in a section of flooring. He’d hauled it down to his place and jury-rigged it into place, and now they had a place to sit outside in the evening.

Now, I know that redneck is a phrase that has negative connotations in many people’s minds, but since moving to the south and living next door to a trailer park I have met my share of rednecks, and have grown in my esteem of this type of people. They are usually ingenious and refreshingly minimalist. The live with less, make do with what they have, and enjoy the simple pleasures that many of us over look. I saw Bobby and his wife sitting out on their deck, and suddenly all I wanted was a redneck deck.

Jeremy must have felt the same way, because the very next morning, we headed up to Lake Street to see if there was anything we could salvage to build our dream deck. 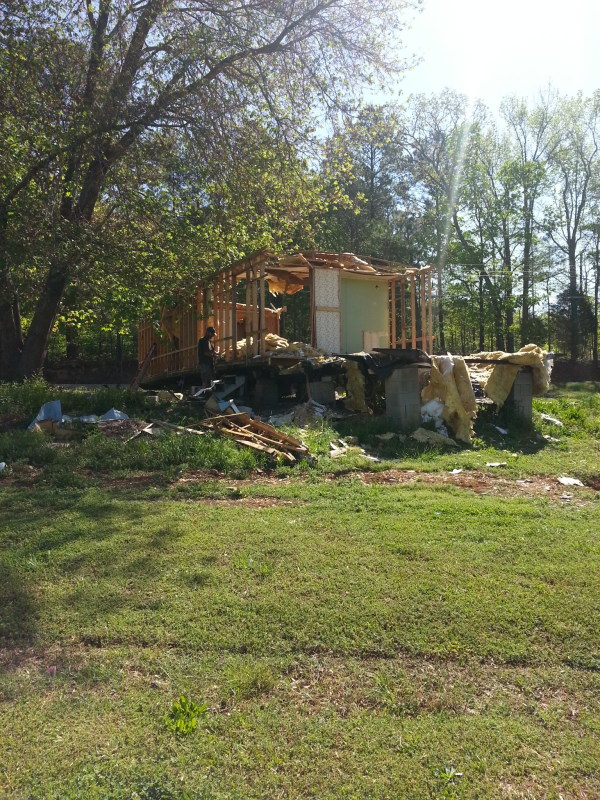 One man’s junk is another man’s treasure, right?

We set to with hammer and sawsall and metal clippers and sweat and by mid afternoon, we’d dissasembled the old trailer enough to extract two sections of flooring.

Which, in true redneck style, we hauled through the park on a small trailer behind a four wheeler. 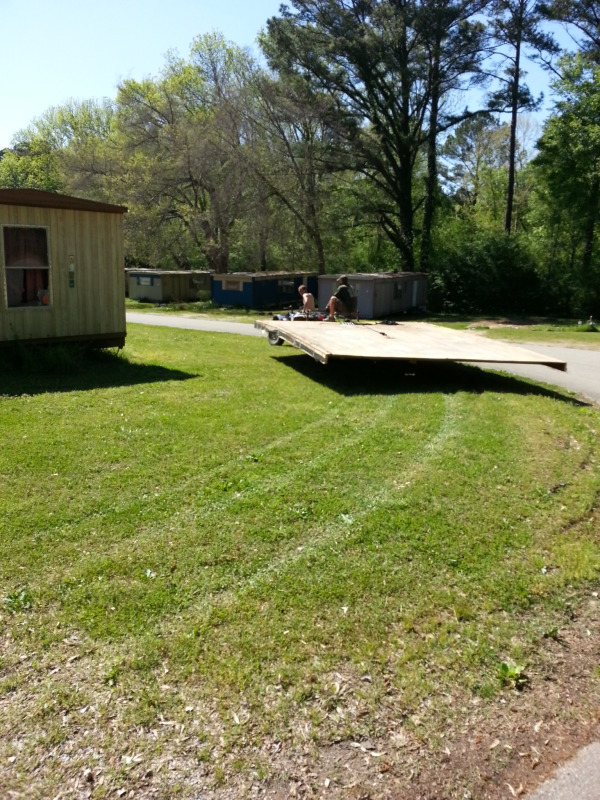 (I laughed the entire way through the park following this redneck parade! “If you can’t beat ’em, join ’em!”)

Some cement blocks were salvaged from somewhere in the park to work as foundations, and within an hour we had our deck. 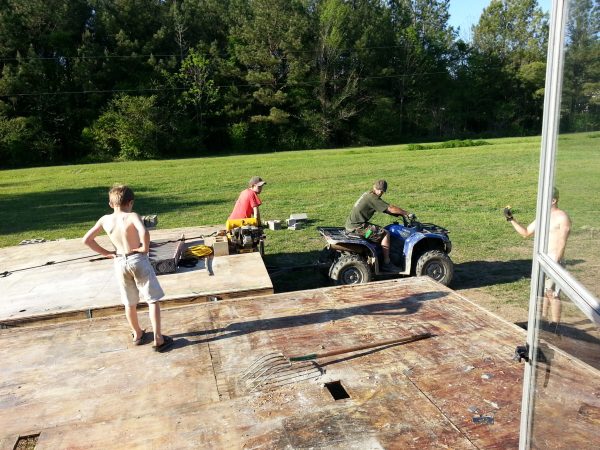 For one day’s labor and absolutely no money spent, we had a deck! And it was wider and longer than what we’d originally hope for–this was going to be awesome!

But it was still very much in process. See how yucky that floor looked? It was stained and sticky from paste-on laminate tiles and 30 years of abuse. As bad as it looked, it smelled 10 times worse. I’m not kidding. We had to close all the windows on that side of the house and the children were not allowed on it while it aired out. 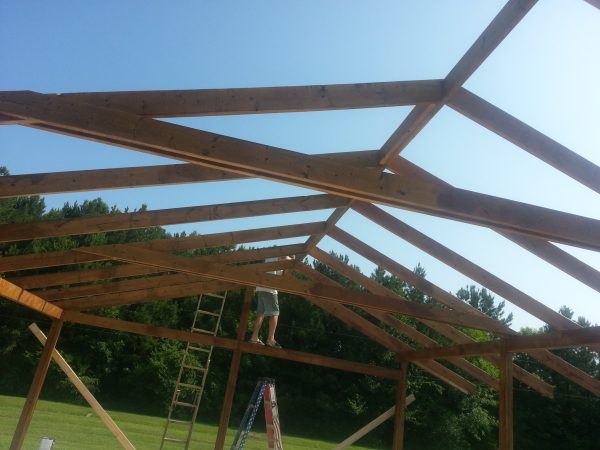 It was another month or two before we had the funds or time to make progress on the deck. We painted the whole surface with Kilz paint which resolved any residual odor, and Jeremy began on the roof. 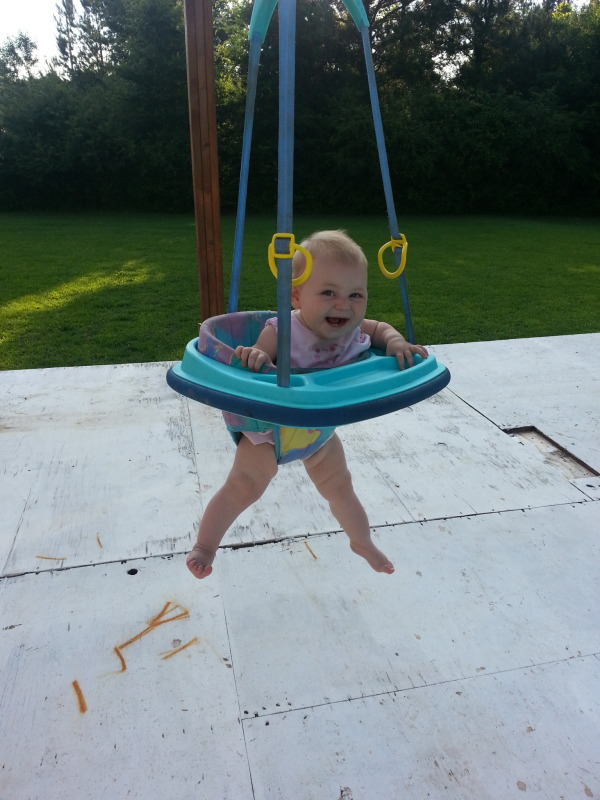 See that lovely white, odorless floor? By now we were into Alabama’s summer temperatures, so the deck was not very hospitable for much of the day, but as soon as the sun went behind the shade trees, we went out and partied. We hung Lydia’s Johnny Jump Up from the rafters and put on dancing music–we already loved our deck!

Then came the day when we realized our air-conditioner was not gonnna keep up with the summers temperatures as long as we had a black shingles on the roof. We followed the example of one of our neighbors and invested in a white metal roof–and while we were at it, the porch got its roof, as well! 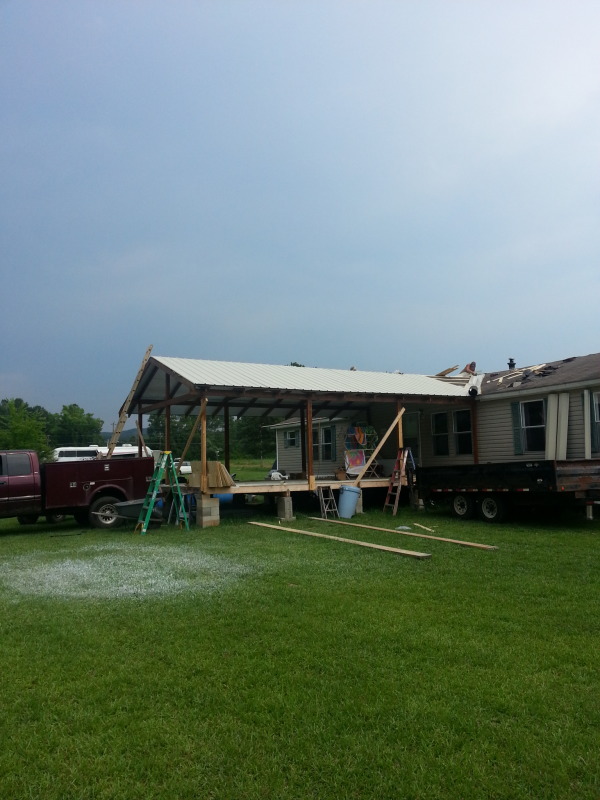 Jeremy and his dad and brothers and the park maintenance guy, Joe,  spent 2 days in blistering heat getting the new roof on, and when it was done, our air-conditioner sighed a sigh of relief and actually cycled off for the first time during the day! And, we had shade on the deck! 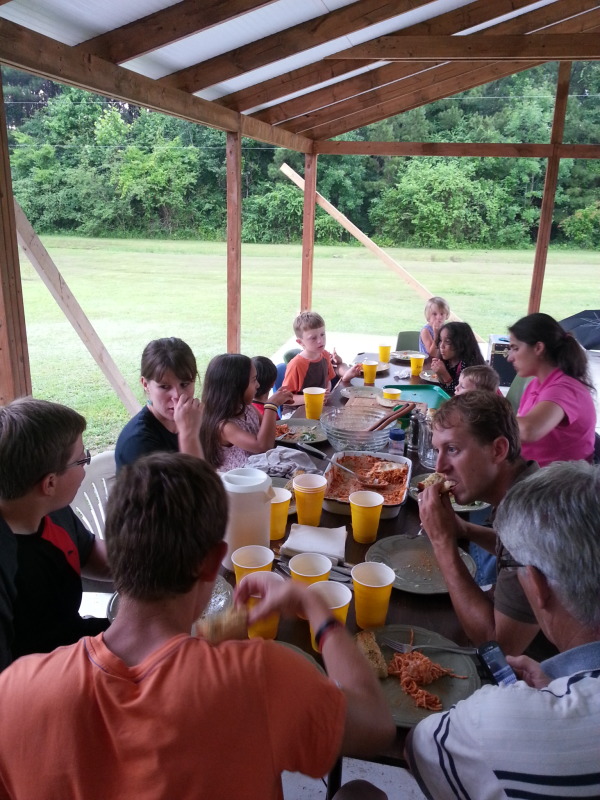 Of course, we partied immediately. Despite the fact that there were no screens yet and the bugs were still a menace, we invited more than a dozen people over for dinner and reveled in having plenty of space to seat everyone! 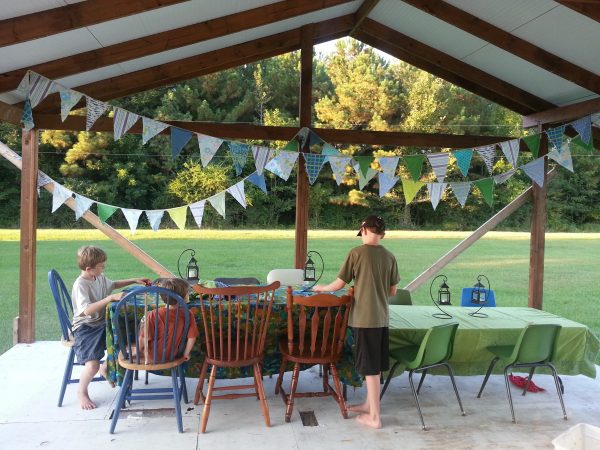 Then there was a long stretch (3 months?) in which we once again didn’t have the time or resources to make any more progress. We didn’t let that stop us from enjoying the porch as often as the bugs and weather would let us. We had Jesse’s birthday dinner outside, and I confess to leaving the birthday banner up for two whole weeks after his birthday because I was so in love with the pennants against the beams against the backdrop of woods and grass and sunshine. My view outside of other windows of my home is not quite as lovely, but I’m OK with focusing my attention in the direction that gives me the most joy! 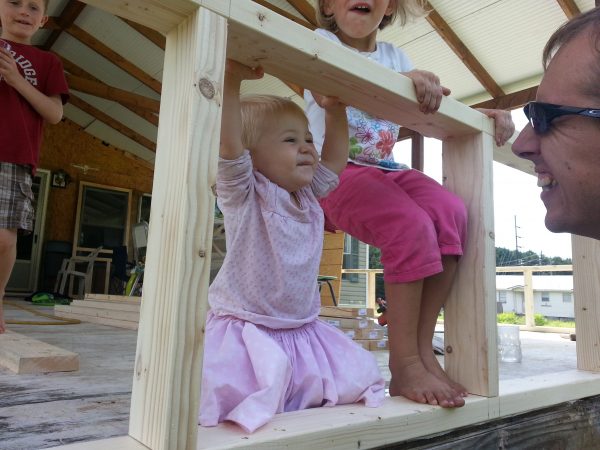 We were all excited when once again Jeremy was free to work on the deck. He began by installing the knee-wall that would go all around the edge of the deck. We all joined him, probably more hindrance than help, but we were just so excited to be making progress again! 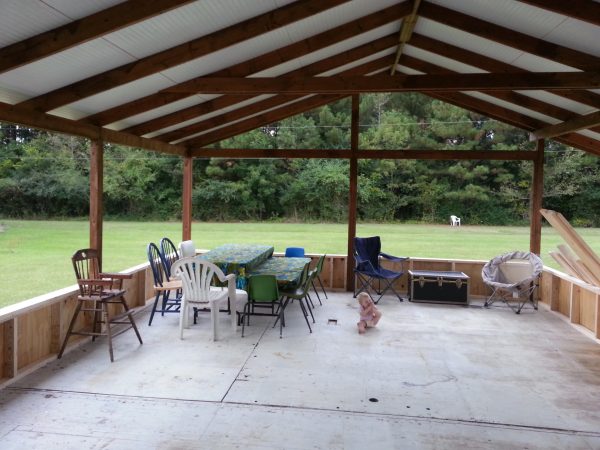 So close to being done! I realize this still doesn’t look like something off Pinterest–we still haven’t decided what to do for the flooring. Our deck furniture is also rather lacking, but this space is clean and functional so we’re not gonna let appearances keep us from enjoying or sharing it! 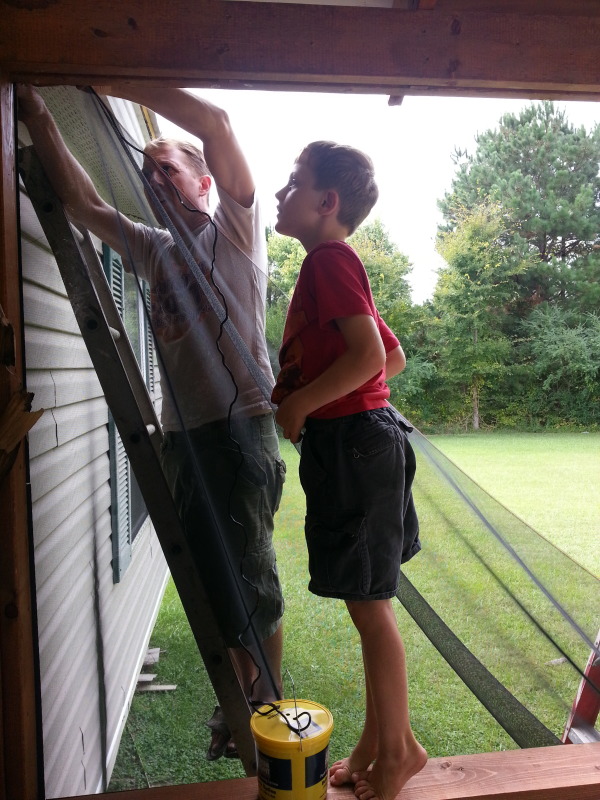 Finally, the screen went up!!!

And now we have a lovely outdoor room to be hospitable with and to relax as a family!

Bobby, the source of inspiration for the deck, came by the other day to view our progress. He’s now calling our home “The Triple Wide”. In true redneck fashion, he complimented our creation with these words, “Ya’ll are lookin’ like somebody somebody needs ta’ rob!”

Thanks, Bobby. Thanks a lot. 😉 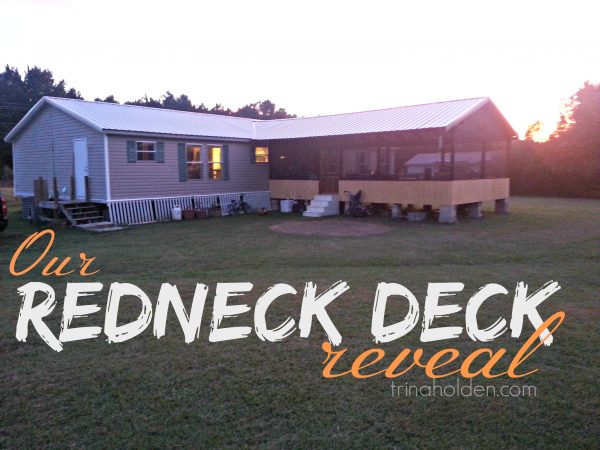 There’s still work to be done–we want to stain the outside of the knee wall, and certainly skirting and trim would be nice. But, as my favorite home design blogger, Nester, says, “It doesn’t have to be perfect to be beautiful”.