Our first night as Indians 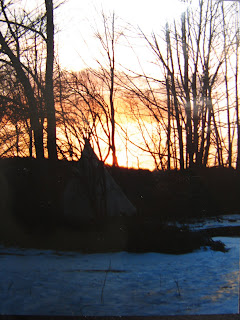 The first night in the tipi was mercifully non-eventful. We had found our bedding, set up the cots, and rolled out our sleeping bags by the light of a Coleman lamp. We were all grateful for past family camping experiences that made certain aspects of this new adventure familiar and thus comforting. The smell of the lamp oil, wood smoke, and camping gear that had been stored in the attic for months all brought back memories and helped to make us feel a little more secure, if not entirely at home.

The last sounds came Dad as he shoved wood into the stove to keep it going over night, and then the hissing of the lamp ceased as Dad turned it off, and the glow slowly died, leaving us in blackness. Quickly my eyes adjusted, and I could just make out the hole at the top of the tipi where the poles stuck through the canvas. Then I snuggled down in my down sleeping bag, shoved my pillow into place, and closed my eyes. It was very quiet, the air still frozen with early spring, there was not even a cricket to sing us to sleep. A slight breeze made the canvas shuffle over our heads, and I felt a draft flow over my forehead. We were warm, but that was more thanks to the huge wood stove in the middle of the floor – no more than 8 feet from any of us – than the slight protection the canvas offered us. Throughout our time in the tipi we would always feel like we were still at least half-way outside, a nice feeling on a calm, summer afternoon, but rather terrifying in a thunderstorm.

I’ll never forget that first sunrise in the tipi. Our ancient orchard/maple grove stood between us and the eastern horizon, so the orange light of morning had to reach us through a maze of twigs and branches heavy with buds. The pattern of sun and shadows was painted quietly over our heads, the canvas soaking in the colors readily and speckling us in turn with the orange and pink light. I was smitten, and have loved early rising ever since.

Dad was already tending the fire, which had not made it through the night, due to poor quality firewood. Mom told us kids to stay cozy in our sleeping bags until they’d got rid of the chill in the air. Dad worked so hard those first weeks – actually, he never stopped – trying to make things as normal as possible for us. Normal was hardly the word to use, though, as we were so far removed from the most vague definition of the word. But he always rose first in the morning, and was the last in his sleeping bag at night, working to ensure that we had the best he could offer of the basic needs – food, clothing, and shelter. The tipi taxed his patience in that last goal – proving to have a life of its own when the wind rose – but, again, I am getting ahead of myself.

Judging the drafts during the night to be more than ‘normal’ for even a tipi, Dad greeted us in the morning with the news that the tipi would have to be re-pitched that day. This would mean a huge amount of effort for the family, since we didn’t have extra help today, but we all agreed that we wanted to be warmer! It being Sunday, Dad explained to us that though we didn’t normally work so hard on the Sabbath, the Lord allowed exceptions, such as when the Isrealite’s ox fell in the ditch. So, we began hauling everything outside into the frosty morning.

10 hours later, thanks to a surprise visit and help from the entire Studt family, we had hauled all our belongings out of the tipi (including the heavy cast iron wood stove) off to the side, re-pitched the poles at the correct angle, re-draped the canvas, re-tied the inner lining, moved all the stuff back in, re-built the asbestos chimney for the stove, re-light the fire, and finally our home began to warm up. Mom had managed to scrounge together a meal of peanut butter sandwiches for us and our guests, and we called it a day.

We waved goodbye to our new friends, promising to return their friendly welcome with a visit to their homestead the following week. Then we settled in for the night, never so glad to see a canvas cot and sleeping bag.