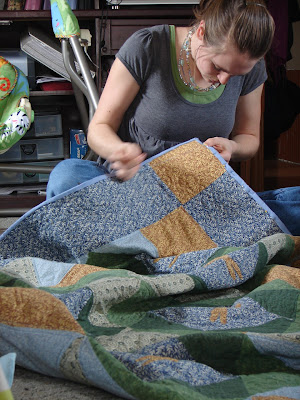 So, do you wanna know what I did on my own for the past few days?

It was kinda wierd to be all alone after the kids went to bed last night. I was reading before I went to bed and suddenly had the wierd idea to read outloud. To myself. With an Australian accent. I read a whole page with what I imagined sounded like an authentic Aussie fresh from the Outback. Then I switched to an English accent. I think I sounded like a little British nanny. I have to say I don’t think I did too bad with my accents, probably from watching plenty of episodes of “Australian Express” when I was little, and having a British grandmother.

Then I realized that I would never have been doing this if Jeremy were home, so I clammed up and continued in silence. 🙂

We ate leftovers, slept in (till almost 8am!), and I actually had to tend the coal stove – which I never do normally. I worked on my quilt a bit more, and really am almost done now.

Tonight I’ll drive out to Syracuse to pick Jeremy up again. It’s probably a good thing he was only gone 2 days! 🙂