Of Wreaths and Warmth

Warmth as in non-frozen toes, glad-to-be-in-my-cozy-little-house-and-done-making-wreaths warmth. Yes, that kind of warmth. I spent the morning making my last batch of Christmas Wreaths. I was plumb tired of 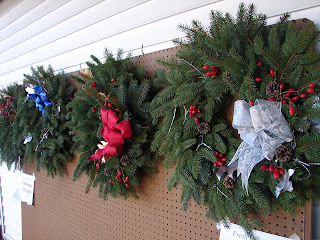 wreaths before I started this morning, but I pushed through because I promised myself I would not have to make any more after today. I was grumpy, though. Because I had to step through 8 inch drifts to fetch the last of my pine boughs, stored outside to keep them fresh. Because after said ginger stepping, my boots still got full of snow. Because hauling the boughs inside after shaking them free of snow was a cold and wetish job, which caused the leather gloves I was wearing to stink. I was half way through with my second wreath before I figured out what the odd smell was. Knowing what it was didn’t help. Displeased because when I finished the third wreath, which was a special order (I would have never put that bow on it myself), and called the person for which it had been made, said person told me they’d received a wreath as a gift, and didn’t need mine anymore. Oh, well, I’ll hang it out and see if it sells. I did do a good job on it, mind you. Just not my style.

I made four wreaths, hung them out, unplugged my glue gun, grabbed my stuff, and headed into my in-laws warm house to visit until Jeremy was ready to go home for lunch. I have been home all afternoon, despite my previous plans to go shopping, due to the nasty road conditions. I worked on several projects, some I can’t tell you about, some I can (but not yet). Let’s just say the second half of the day was more enjoyable than the first, especially since I threw dinner in the Crockpot this morning so I didn’t have a thing to do but play all afternoon. (But if dinner’s in the crockpot, then what’s baking in the oven? or should we say, ‘Who?’) Well, and do some dishes, and mind the little boy who lives here, making messes as a way of life. 🙂 Ah, the joys of a homemaker. 🙂 I love my warm house. And my boy. 🙂

P.S. I almost forgot to ask – I was wondering if any one out there who has seen my wreaths would like to try and make their own? I had in mind to prepare a tutorial (already took all the pictures) but wanted to see if there was any interest before I went to the trouble. Despite my complaining, it is satisfying to create your own decorations for the holidays! 🙂 It’s just ’cause I’ve made so many that I am burnt out on them. If you’re interested, just leave a comment on this post, and I’ll go at it!