Yes!!! We made it in by the weekend! Reporting back to our loyal readers has been tricky, as the computer is the one thing still at the old house – internet connection at the new house doesn’t happen till next Wednesday. So, I snagged a moment to slip across the icy lawn to the old house to update the blog.

We began moving furniture into the house yesterday morning. Anja was here – spent three days and two nights, bless her – and we started with the dressers. We made a ramp from the back door of the old house. This was not my idea. It took forever to get three dressers and 14 drawers over the treacherous ramp and the icy lawn. Of course, it was the Unmentionables Drawer that fell… 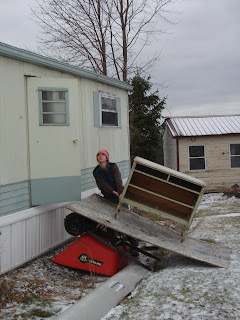 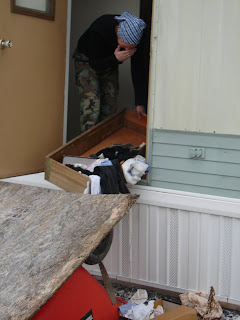 Lunch was a meager affair, as we had not made time to shop or cook…we all had something different. Jesse enjoyed his yogurt in such a way that another task was added to the never-ending list – Bathe the Baby. Jeremy could not find anything at first, and actually resorted to baby food. 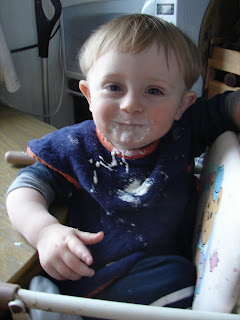 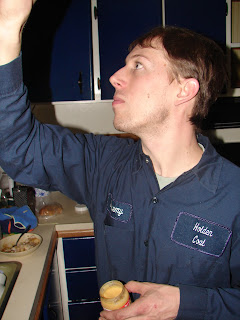 Anja was such a blessing, taking such good care of Jesse in between all the chores I gave her, that I realized with surprise as I changed Jesse’s diaper this afternoon, that it was the first time I had done so in three days!

After dinner (Pork Chops with applesauce, perfectly steamed broccoli, and Anja’s fantastic new sweet potato recipe from Aunt Becky), the Holden’s arrived to form an assembly line to get the rest of the furniture over. I was too busy at this point to take pictures! It was incredible how fast the majority of our belongings were moved over.

I was so excited about our new house, I was all tingly (like Anja gets the night before her birthday) and stayed up till 11:00 putting things away and tidying up. Finally we called it quits and fell into our freshly made bed for an well-earned rest!

We are truly blessed to be in our new home, rejoicing in God’s provision of such a nice trailer, and all the generous help we received that got us completely renovated and moved in in under a month. Thanks to our families and friends who gave so much time and effort!