I have already told you about my Green Smoothie Kick – I just had to let you know that I’m still on it! Off and on over the last 9 months, but lately more on than off, I have been making myself a daily smoothie with fresh greens and plenty of fruit. The greatest thing about it is that Jesse loves it too. So even when I’m too tired or busy to cook and serve as healthy a diet as I would like for my 2 year old, he still gets that burst of good stuff in his system several times a week. 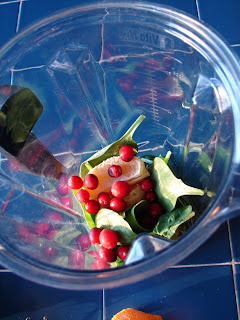 spinach, orange and cranberry smoothie – I always add a half a frozen banana, too!

Lately he has begun initiating the smoothie process in the morning – getting the oranges and baby spinach out of the fridge, helping to prepare the fruit, and putting stuff away when we’re finished. It is such a delight doing this all together. 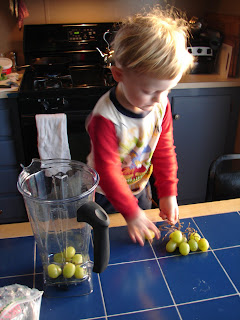 At Wegman’s (Lovely, local grocery store chain) this week I saw these green grapes that were as big as small plums. I just had to get them for Jesse. He loves grapes and has known the sign for months. Just this month he has begun to learn his colors – identifying them, signing them, AND saying them! So I taught him the sign for ‘big’ and together we would sign “Big, Green, Grapes!” every time we got them out for a snack. He likes to put them in our smoothie.

The other day I caught him on video helping me. He takes his job so seriously!

Here he is downing his first helping, then signing and saying, “MORE!” 🙂 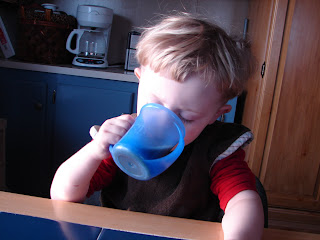 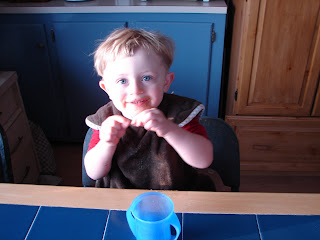