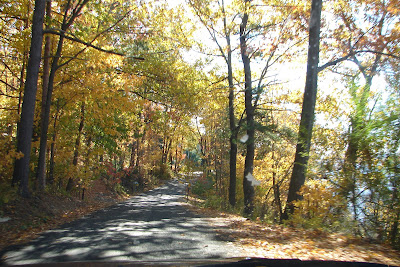 Last Monday Jeremy won a pair of tickets from our local Christian radio station to attend the United Tour Concert with Michael W. Smith and Steven Curtis Chapman. What fun! Then, over the weekend he mysteriously marked off both Wednesday and Thursday (the day of the concert) on the calendar, and gave me guidelines for packing. I didn’t know where we were going, but I knew it would be fun. That’s the great thing about my husband, and how God matched us up – he loves surprising me, and I love being surprised!

Wednesday he worked till noon then we packed our bags, brought the Boy to Grandpa and Grandma’s house, and off we went. Heading south along Seneca Lake, we drove through Watkins Glen, then North, up the other side of the lake. Eventually we got to our destination – a hotel in Penn Yan, where he had booked a room for the night. This was, Jeremy explained, a budget-friendly mini vacation, which I was fine with! He had had me pack a dinner we could heat in the microwave so we didn’t have to spend money at a restaurant, and we both had brought along yummy snacks. We had fajitas while we watched “Myth Busters” together on the couch in the room, with apple cider in the wine glasses I had packed. It made for a very relaxing evening, not having to leave our hotel room at all! 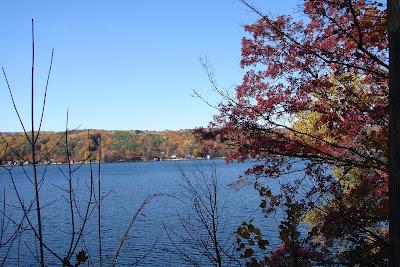 In the morning we checked out and headed south for a senic drive along the shores of Keuka Lake. The views were breathtaking, the colors so vibrant, I kept begging Jeremy to stop and let me take photos!

We also went window shopping and even found a thrift store. The weather was perfect for strolling around and pretending to be tourists. 🙂

In the afternoon we headed up towards Rochester, where we had another budget-friendly dinner at Red Lobster, thanks to a gift card! I don’t know why, but I always end up taking pictures of our plates when we go to a restaraunt. I just love the presentation! And Jeremy has a knack for ordering the prettiest plate on the menu – mine doesn’t usually look half as good! Here he is about to dig into his steak and shrimp combo.

Then it was on to the concert, which, of course, was awesome. First time Smitty and SCC have ever toured together – you can imagine the power of having them both on stage at the same time. There was a lot of humor, too, as they both dug out ‘oldies’ and sung snippets of eachother’s songs.

We got home at midnight, and I got my Boy back after lunch on Friday – couldn’t get him sooner ’cause I didn’t have a car nor my cell phone (which had accidentally gone to work with Jeremy). So I just busied myself around the house and was amazed at what I got done in just a few hours without a two year old to mind! Oh, but I missed him, though! It is good to be home.

Tonight we call another square dance – a new group, out toward Morrisville. Should be fun!