Life with a 15 month old

I paused in my dogged determination to get my to-do list done this morning to do a little creative writing. It was a nice break…


Mornings begin with the child telling his mother he is awake. As he does not say my name, he just lets out a yell. This may be at 4, and in that case, I ignore him. If it is 7, I can’t, for I know that within that wail is an honest cry for nourishment. When I come to the door, he usually greets me with some animated hand signals, which, if they could be translated, would probably be something like “Look, Mom! It’s light out! That means I can get up! And see Daddy’s hat up there on that hook? I spotted it about 5 minutes ago and I wanna wear it! Can I? Is it time to eat? I think it is definitely time to eat!!! Can I get up now?”

I am a morning person – it’s where he gets it from – so I am usually able to greet him cheerfully – “You wanna get up? Say ‘up’!” – and I grab my boy out of his playpen and smother his face with kisses while he arches his back against my embrace. He was never a cuddler….

We head back to the bedroom to the warmth of the down comforter. He is content to lie still during his nursing, but as soon as he’s had enough, the adventure begins. It is a huge challenge to navigate the mounds of blankets and sleepy bodies on the bed. He pulls and climbs and grunts and falls and grabs -covers, hair, whatever- to get to the head of the bed and – the window. The goal is to stand up and knock on the window, turning back with pride to see if his parents have seen his accomplishment. But it is hard to see him when he is standing on your face.

When we tire of his pummeling us, and his sitting between our heads pinching both our noses simultaneously, trying to get us to ‘beep’, I dump him over the side of the bed and tell him go “go play!” At this point I know my ‘sleeping in’ is almost over, for it will only take minutes for him to get into something, and I will have to intervene.

Silence is golden – for a time. An alarm goes off in my head whenever it’s been quiet too long. Then down the hallway or around the corner I go to see what he has gotten into that has him so engrossed. Whenever I forget to ‘lock’ his dresser drawers with an old curtain rod shoved through the drawer pulls, I find him in his bedroom emptying the contents all over the bedroom floor. This happens so often, it is a good thing I don’t get upset…I just let him ‘help’ me put them all back in the drawer.

He is actually very good at helping because I encourage and praise him whenever he makes the effort to join me in my tasks. You should see him help with the laundry. He has watched me lift a shirt or pair of jeans and shake them loose before I fold them. So, every time he gets a hold of an article of clothing, he stands up an shakes it vigorously. And yesterday he imitated me in another task – he grabbed his dirty pants and dragged them all the way down the hallway and threw them in the hamper. “All by himself?” I asked his daddy incredulously. “All by himself.” He assured me.

Whining – rare, but happens most when:
1. the child is trying to put a lid on a Tupperware container. He KNOWS when it’s not on right. He wails until it is.
2. when his signs, like “help”, “eat”, or “drink”, have not been noticed, then he has to get vocal.
3. when he gets stuck – fingers in a drawer or the pages of a cardboard book, on the other side of a door he has slammed, or in a pair of shoes that are too big. 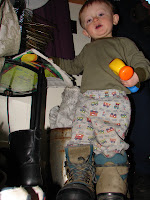 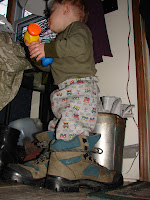 the scene this morning

That’s just the first hour of his day. I guess this post will have to be continued.
For another busy mother’s musings about keeping perspective in this holiday season, visit my cousin’s blog today.