This is my dear friend, Monique. She came into my life the summer we were both 22. I found her sitting in the back room of the local thrift store. They didn’t have a display window to use her in, so she had been living in the back room for about a month. I decided to ask if the ladies would part with her. One little old lady had to consult another little old lady, and they two had to talk to two even older, littler ladies, who discussed the proposition together in whispers in their office…finally they came to the door and announced to me that they would part with her for $35. “SOLD!!!!” I would have yelled – if I hadn’t thought it would make them jump right out of their nylons.

So, Olivia and I went into the back room to claim our new friend. As I picked her up, she separated at the waist, exposing a very, well, red and lacy pair of undies. This was when we began to be embarrassed. I made Olivia carry her legs, including the black, fish-net tights and the red, well, underwear. I lifted her torso, which was clothed in a lovely, silky, blue dress, vintage 80’s style, and her arms immediately became dislocated at the shoulders. I wrapped my arms around her in a big bear hug, spare fingers snagging wig and appendages, whispered in her ear that it would all be over soon, and headed through the thrift store behind Olivia, each of us carrying half of a half-naked manikin.

Monique was waving her right arm out in front of me like a blind person groping her way through the obstacle course of clothes racks. I tried not to bump into anyone, or leave them emotionally scared, but it was all I could do to keep from falling over laughing. Then, suddenly, someone was shaking Monique’s out-stretched hand – it was an acquaintance of ours, graciously introducing herself to our new friend. 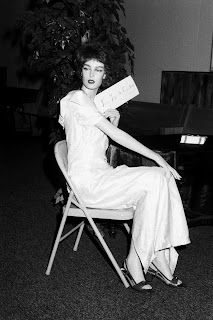 At last we made it to the car, strapped her in the to back seat, and collapsed in giggles. For the rest of our errands we were alternately delighted and startled by the visage in the back seat. I chose her name ’cause I thought it had a nice ring when you strung it all together – “Monique the Manikin”.

Monique lived in my bedroom for a few weeks, until I grew tired of the start she gave me every time I walked into the room and saw somebody sitting on my hope chest, waiting for me! We moved her to the attic, where she had an even more startling effect, because we didn’t go in the attic as often, so we had time to forget she was even there! Every few days you might hear a scream overhead as someone, well, said hello to Monique.

She is quite a sport, and has participated in a few well timed and very humorous practical jokes. She was most honored when I asked her to be the guest book attendant at our wedding. She wore a white silk dress, and red heels to match her make-up and manicure (she likes red). she held a sign that said “Please Sign the Guestbook” and greeted everyone when they arrived.

It was Debbie who wanted to invite her to Martha‘s wedding. Martha wouldn’t have it, but did allow Monique to come to the square dance. There she warmed everyone’s hearts, even Martha’s, and she was invited to the reception – as long as she didn’t eat anything.

She sat next to the photo booth and held the props for those who wanted to get creative when they got their picture taken. Some even took her in the booth with them. Some only took an arm… My favorite shot was this one, when Jerry took her on his lap. Obviously, Jerry thought it was a lot of fun, too.

Monique has brought such joy to our lives, I have decided I would like to adopt more manikins. I have such a heart for these…people. They need an environment where they are appreciated and cared for, not stuck in some thrift shop window wearing last year’s fashions (if that). Monique is looking for a best friend – preferably a female manikin in a standing position, and also is interested in a boyfriend (tall, dark, and handsome – you know the type). So, if you know of a manikin looking for a home, please contact me! I will pay for traveling fees and whatever other expenses are involved.
Really.
I’m serious. Spread the word – I want another manikin!