The first night at Allume, I roomed with my mentor and friend, September, and her fun and funky daughter, Sarah. (Have you noticed I have an appreciation for funkyness? It’s like the highest compliment I give people. “You’re funky. I like you!”) 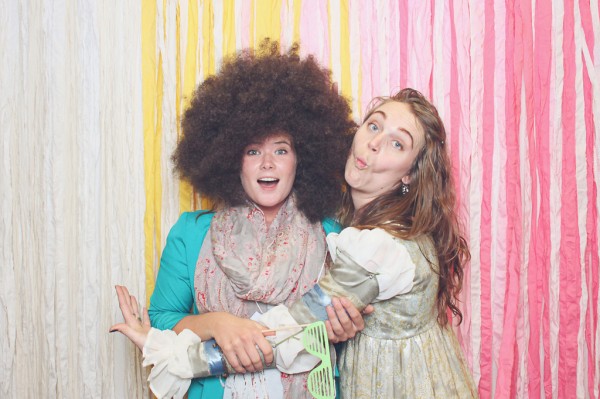 I took one look and knew I was gonna be guilty of grand wig theft by the end of the week.

The wig thrilled me. I have no idea why. It may take this whole series for me to explain to you—to myself–why the wig was such an important part of my weekend. Why I loved it so much. Why I let so many photographs be taken of me and the wig.

Tonight I loved it because it made me laugh. I was so stressed that my trapezius muscles were were one, taut hunk of burning muscle which literally kept me from getting more than 3 hours of sleep that night, but the wig let me laugh. About wearing it in the smile booth. About how much fun it was to be finally free from a life-long bondage to ‘what will people think?’ and to be able to do crazy things like wear a 3 ft. afro wig in public. I fell asleep Friday night giggling about the wig.

Thursday at Allume is like Christmas. Friends who feel like family start arriving, the halls and rooms are full of joyous reunion, and—you receive your swag bag!

(Gals, if you have ever dreamt of attending Allume, but weren’t sure if it was worth the cost, the swag bag is the final answer. It’s a gorgeous Dayspring tote chock. full. of. goodness. The latest books from the authors you and I love, plus gifts of chocolate, jewelry, even Christmas ornaments from the conference sponsors. The only problem? The women who fly have trouble getting it all back in their luggage. What a terrible problem!)

I actually don’t remember much about the next day-and-a-half leading up to my talk, except one thing: prayer. I know I took a walk with Janelle and another jaunt with Gretchen,Dawn, Hiedi, and Katey that ended with them vowing to never let Trina lead an expedition again (I do hope they eventually found a coffee shop…) Oh, and I remember that awesome pita shop where you created your custom pita and I put pesto on my gyro-style pita…

But I digress. What I was saying was that the highlights of the weekend were when people prayed for me. See, I could have put on the mask of ‘I’m ok, I’m gonna make it, somehow I’ll get through this weekend’ and not revealed to people how insecure, inadequate, and pretty much freaked out I was. But instead the Lord gave me grace to be completely open and utterly needy with everyone I met—and even the ones I hadn’t met yet! And each time I bared my heart, these women fortified me with words of encouragement, faith, and prayer.

Could all these women be wrong? I think not. I dared to hope. But I was still a wreck.

Until I met Emily. Thursday night, in line for dinner, I caught site of a familiar face—Elisa! I had had the privilege over the summer of encouraging her to start her own mastermind group and relaunch her awesome ebook Impact My Life: Biblical Mentoring Simplified

(which is on sale right now!), but we’d only ever spoken over the phone. Now here she was in person, and when I finished hugging her, she introduced me to her friend Emily.

There was just something about Emily. She looked familiar to me, though I had never met her before. She just had the look of a friend. And when she found out that I was a wreck (remember, I wore no mask) she asked if she could pray for me.

(I want to be a person who goes to prayer within a minute of meeting a stranger, don’t you?)

And then she asked, “Can I put my hand on you?”

My dear girl. You have no idea how OK I am with you putting your hand on me. Yes, yes—I’m totally OK with the ‘laying on of hands’!

And then sweet Emily from Maine prayed for me in the middle of the bustle and hustle of opening night at Allume, and I testify that I felt a peace surge through me deeper and stronger than anything I’d felt since saying a shaky ‘yes’ to Sarah Mae asking me to speak 8 months before.

I have told everyone who will listen to me in the past month that God grew for me at Allume—that He is way bigger than we think He is. And I believe the reason He was able to increase in my life—to expand outside of the box I had viewed Him in, was because of the prayers of His people on my behalf.

So, I’m just gonna say thanks, right here, to all who prayed for me, and to God, who answers prayer.

Are you ready? The next installment contains the miracle. Friday God pulled a Gideon, and took me along for the ride.