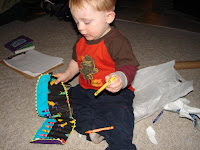 I was planning on posting pics in order, of course, but I want some photos from my in laws for the post of Christmas Eve, so here’s Christmas Day!

Traditionally, Jeremy and I sleep on our pull-out couch under the Christmas tree on Christmas Eve. We plan on letting this become a family tradition when our kids are older. Until then, Jesse was down the hall in his crib. Jesse’s Christmas present to his momma was to sleep in until 8:20! We got up and got ready to open presents. Jeremy was just a bit excited, chanting – “It’s present time, it’s present time! Open them up to see what’s inside!” I share that just so you who know him can be amused -it was totally out of character for him. 🙂

Jesse opened his crayon roll first. He definitely liked it, but in a moment 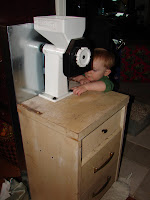 he had wandered off to find his favorite present from his Grandma that he got the night before. 🙂

Meanwhile, Mommy and Daddy opened their gifts. Jeremy gave me a grain mill! Just what I wanted! He took a hand mill from the old Y2K stash, mounted it on a stand and motorized it, being careful to gear down the r.p.m.’s so the mill would grind slowly and powerfully. Now I can grind my own grain as I need it so it will be fresh! 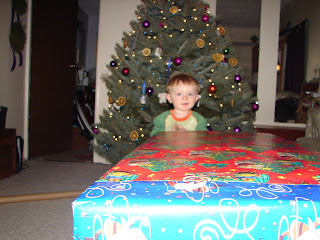 The box the mill had been packaged in has proved to be as delightful to Jesse as the contents were to mommy. This morning I cut peek holes in the box and we have been climbing in and around it and waving at each other through the holes. Loads of fun and giggles. 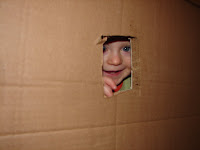 So, did you get exactly what you wanted? Did you have the delight of giving someone else the gift that made their day? Tell us about it – share the fun! 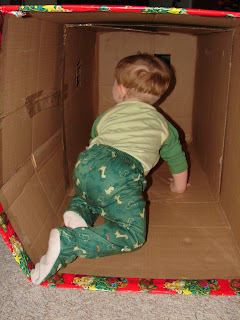 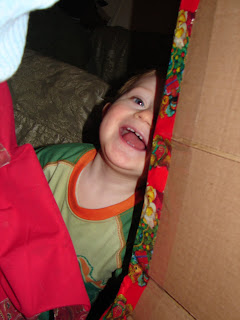