Do you feel like a little something different for breakfast? I don’t know about you, but I’m addicted to having variety in my diet! Here’s what Jesse and I had for breakfast this morning (Jeremy just looked at us funny). 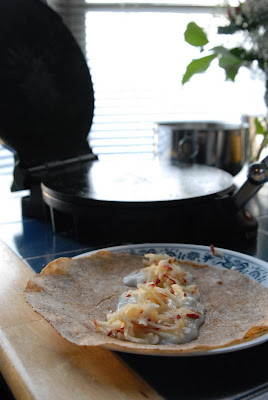 I had tortilla dough soaking overnight ’cause I’m making fajita’s for dinner. Inspired by the cinnamon sugar variation on the recipe, but not wanting to mix cinnamon into my whole batch of dough, here’s what I did…I mixed 1 tsp. cinnamon with 2 Tbsp. succanut and rolled a portion of dough in it before I pressed it flat on the tortilla maker. The result was a slightly sweetened, subtly flavored, crispy tortilla, which we then spread with homemade yogurt and a fresh grated apple and rolled up like a burrito. 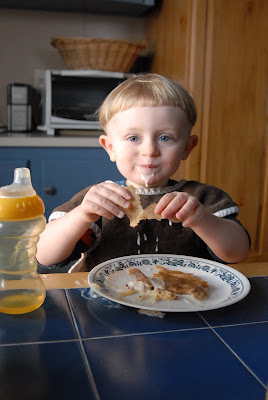 Jesse ate two with evident relish, I had three! They were sort of like crepes, but a lot healthier! 🙂

If you don’t have a tortilla maker, you could get a similar result, I would think, from heating store bought tortillas in a frying pan with a little butter, then sprinkling them with cinnamon and sugar. Try it!