Yesterday, when my dear mother arrived to help me with some gardening, she came bearing gifts, as always. Most were either plants (meadowsweet, irises, daisies) or things to plant them with (shovel, horse manure, and mulch!), but she also brought in a large vase of fresh cut stems –
“A bouquet for you to arrange!” was her explanation. She knows how much I love arranging flowers, and that the gift of un-arranged flowers would be more appreciated even than a perfect posy. These are the first flowers I’ve had to play with since my promise of a bouquet tutorial for you all, so I took pictures, and here they are… 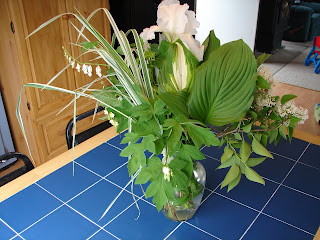 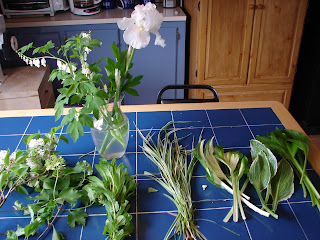 First, I lay all my ‘ingredients’ out on the table, except for the fragile bleeding hearts and the iris, which I left safely in the vase so as not to bruise them. Left to right, we have:
3 stems white lilacs
1 stem viburnum
a bunch of mint (for fragrance!)
a bunch of Japanese ribbon grass
6 variegated hosta leaves
8 regular hosta leaves
Do notice how few flowers there really are here – this is what is blooming this week with the cold, dark weather we’ve had, yet I will show that it is fairly simple to make a lovely bouquet with whatever you have on hand. And don’t tell me those variegated hosta leaves aren’t as pretty as flowers!
I chose a medium sized vase (aprox. 8″ tall) with a generous, yet still tapered neck (3 in. wide at the narrowest) to support my bouquet. It is important to a balanced arrangement to have the right vase. You want a vase large enough to accommodate the amount of stems you have, but small enough that the bouquet remains the center of attention. If you do not have a collection to choose from, a pint or quart sized mason jar (depending on how many flowers you have) will do wonderfully. 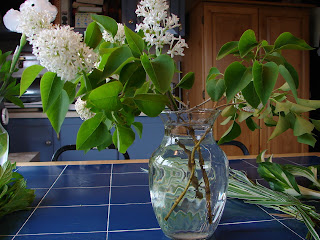 First I stuck in the gangly and woody lilac stems, to form a base network of stems which would support the rest of the flowers. 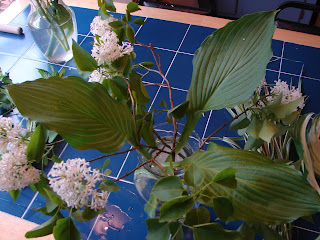 Then came three large hosta leaves, spaced evenly (but not too perfectly!) around. One of the main principles I was taught in flower arranging was the Japanese rule of working with odd numbers – 1, 3, or 5 blooms generally look more artistic than a pair or four of the same thing. You will see that I will repeat this principle throughout the bouquet. I commend mother for bringing me just the right amount of stems of each flower! 🙂 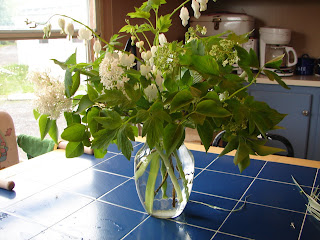 Now that I have a nice ‘foundation’ laid, I will begin adding stems of mint, bleeding heart, and hosta until the bouquet fills out. I am careful to turn the vase so I keep adding evenly, and don’t create a one-sided bouquet. 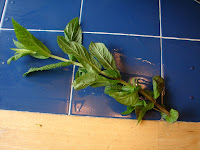 As I add the stems, I will peel off any leaves that end up below the waterline – for two reasons: many leaves will begin to stink if submerged in a vase for a length of time, and the stems are easier to place without the extra bulk. 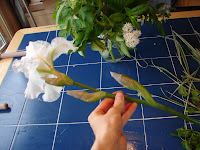 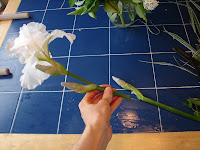 When the bouquet is full enough, I am ready to add the focal point – the large and lovely iris. The stem is long, and promises three more blooms, so I carefully snip the stem right above the lowest bud, creating two stems out of one.
I shove them each gently into the bouquet, the other stems kindly supporting the rather top heavy iris, with the hope that the bouquet will last long enough for the other buds to unfold. I have not broken my odd numbers rule, as we have one bloom and one bud visible! 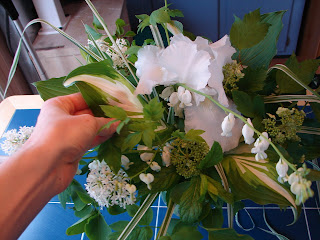 I add 5 of the variegated hosta leaves now, to finish out the bouquet. Instead of shoving them around the base of the other stems, as one would think to do with such a large leaf, I place them throughout the bouquet in places of honor – the resulting arrangement is thick and full – just like my mother’s Moonlight Garden* from which, indeed, the flowers came. 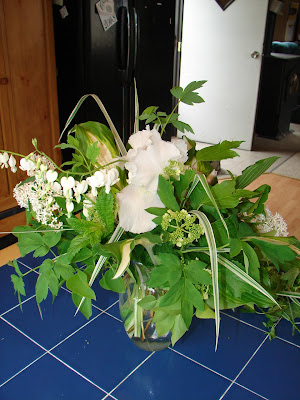 It is my sincere hope that this little lesson will inspire you to got out and gather whatever you have in your yard or garden to create a centerpiece for your table today. If you do make a bouquet, please tell me about it!

*Mother’s Moonlight Garden is so named because all of the flowers in it are white, allowing it to be enjoyed even at night, for the white blossoms show up after all others are consumed in shadows.