Swiss Family Robinson, Little House on the Prairie, Wilderness Family, Goldilocks and the Three Bears – we could relate to all these stories during our time on the homestead. Wait – Goldilocks? Oh, yes – porridge for breakfast every morning…

Cornmeal gruel, to be exact. Honestly, we couldn’t stand the stuff. But we were dedicated to making a sincere effort towards simplicity and self-sufficiency, even if our taste buds suffered. Before we left N.C., Mom had made one final order from the local bulk food co-op, including 25 Lbs. of ground cornmeal, 50 Lbs of oats, and 50 Lbs of brown rice. These grains were the basis for most meals on the homestead. We also had dried beans, whole wheat flour (and some white), lentils, peas, and other good stuff, all stored in air-tight plastic buckets, labeled with permanent marker, completing our pantry.

We didn’t have meat a lot, not for any particular reason but that no one had time to go hunting that first summer. Once in a while the boys happened to get a rabbit or a squirrel, and Mom would faithfully add it to the stew after they had cleaned it. I usually passed up this particular form of protein and went for a spoonful of beans instead! We had beans a lot, to make up for the lack of protein. One dish I remember well consisted of rice, boiled dried peas, sauted onions, and summer savory for seasoning. I liked it, but this, too, got old.

My dear mother did her best to provide variety and treats to keep moral up. But cooking over the wood stove we had installed in the tipi, and later, all summer, over the open fire in the middle of our campsite, she was limited in what dishes she could create. No oven meant no cassaroles, breads, or baking of the usual kind. She learned to use a dutch oven (a heavy cast iron pot with short little legs so you could set in in the fire, and a lid with a rim to hold coals to heat the top), but most of our meals were what could be prepared by frying or boiling. 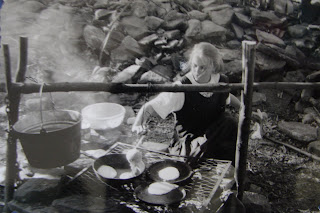 Lunch:
…was whatever happened to be ripe in the garden that day (more on the garden later), cottage cheese, yogurt and granola, rice, unleavened bread. We loved the simple recipe for this that our neighbors taught us – flour, salt, oil, honey, and water. Pat it into a cast iron frying pan and lean it against a stone a little ways from the fire. Flip it once, and when done, cut it into pie-shaped wedges. Some of us with sweet teeth drizzled the top with even more honey. When we had company, or some other pinch required a fast, filling lunch, we would do peanut butter or tuna fish sandwiches. All the ingredients being store bought, we felt that this was ‘cheating’, but often it was the only option.

Dinner:
Often the same as above, maybe the one meal a day that would have meat. If it was a day she was in town on other errands, Mom might bring home some fresh ground beef and we would make beet spaghetti. This was made by grating a huge beet (our neighbors grew them nearly the size of cabbages), adding the meat and tomato sauce, and simmering it over a good fire for 30 min until the beets were tender. It sounds gross, and it looked rather interesting, too – a swirling stew of red tomato sauce, nearly overcome by the violet beet ‘noodles’, but I remember loving it. Probably ’cause we were so hungry after a long day of chores in the fresh air.

Other days, like when a continual rain kept us from starting a fire, or the time a skunk invaded our campsite (now, that’s a story), it was just impossible to cook, and we went for pizza. Mom struggled with feelings of guilt whenever we had to make concessions like that, however, as she was doing her best to prepare for the day when we wouldn’t have that life line – when we would no longer have a vehicle and the nearest pizza shop was a 10 mile walk. So, she did her best with what she had, and was amazingly creative. I don’t remember going hungry, but I do remember eating till my sides ached – fresh cornbread baked in the dutch oven, veggies stew with dumplings, and apple cobbler. It was worth all the arm loads of wood I had hauled and chopped myself to keep the fire going all day…

Continued in  A Day in the Life of a Tipi-Dweller