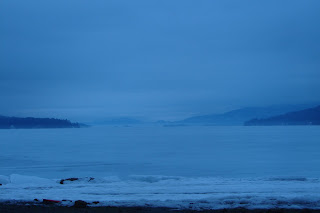 the icy waters of Lake George
I have always wanted to go to Vermont. It was one if the few states on my “must visit someday” list that we didn’t cover on our three week honeymoon. So when Jeremy had to attend a ski clinic at Stowe Mt. in Vermont, I was really excited!

We went with a group of 4 other friends and Jeremy booked a suite of rooms in Burlington, VT. We stayed an hour away from the mountain, but our rooms were half the cost of what they would have been in the scenic, tourist town of Stowe at the base of the mountain.!We had a little kitchenette, two large bedrooms, a living room with a fold-out couch, and a bathroom that was literally the size of my current kitchen, complete with a jacuzzi!

On Wednesday afternoon the ladies and the guys split ways and we girls went window shopping in downtown Burlington. Here was a view of Lake Champlain from the parking garage entrance… 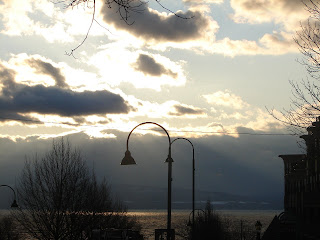 One of the best parts of the trip were all the yummy, home cooked meals we simply heated up after a long day of skiing! It was worth all the work to have that home style cooking at every meal, and not have to be paying the exorbitant restaurant rates in a resort town.

In the hotel room in the evenings we played Settlers of Catan, an awesome board game I got Jeremy for Christmas. (Here is Tim, Jeremy in the background, and Caitlin). One night we stayed up till quarter to one! (those who know me know that’s REALLY late for me!) 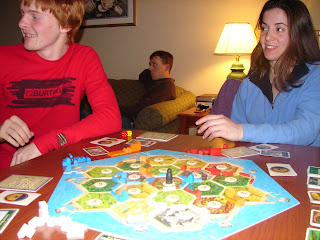 I was actually too busy skiing to get many pictures – can you blame me? But Mrs. Gorman took a few nice shots – she has a good eye… 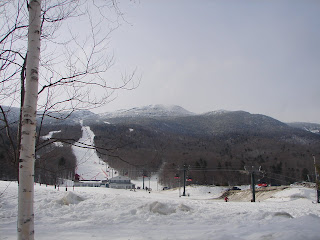 Part of the purpose of the trip was that three of our group were testing for their adaptive ski instructors certification. Tyson and Caitlin both passed their level 1. Jeremy failed his level two exam, but it didn’t put too much of a damper on the trip – he made some good contacts, got some great pointers, and will try again next year.

Tim, Jeremy and I skied together all day Friday (Tyson and Caitlin were still testing) and had a blast. It is great to have a ski instructor as a husband – I am constantly amazed at the endless supply of tips and exercises he can give me that improve my skiing in a single run! Finally, the self-proclaimed “snow plow queen” actually started carving, and was amazed at the purity of motion – it was like my skis had gone from grating on the snow to making music!

Then I realized how fast I was going -” AAAAAHHHHH!!!!”

Tim’s advice – “Don’t fear speed! Open yourself up to it! Speed is…Love!”
For me, speed was terror! I actually went down one slope sitting down, sliding my skis in front of me. This was much easier than ‘tacking’ all the way down a hill that was much too steep for my abilities. It was loads of fun, and such nice weather, too! 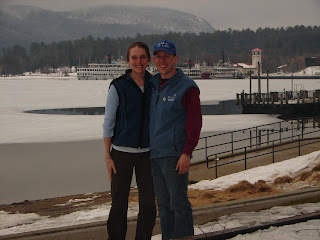 On the way home Jeremy and I took a detour through Lake George and took a picture in the park on the shore.

Learning to carve was not the only thing I accomlished on the trip – I also made siginficant progress on my Seven Year Sweater, as well as learned to knit the european style from Mrs. Gorman. I will show evidence of those accomplishments in a later post.