Isaiah dubbed it the “Cousin Wars”. It’s our very own reality show. Here’s a run down of this week’s episode… 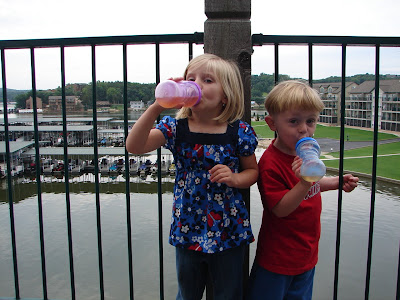 Doesn’t this look like a screen shot from the set? This is Esther, almost 4, and Jesse, exactly a year younger. Her presence on the trip has definitely motivated him to become more verbal. Of course, the words you hear most frequently are “Mine”, “No”, and “Nooooo!” 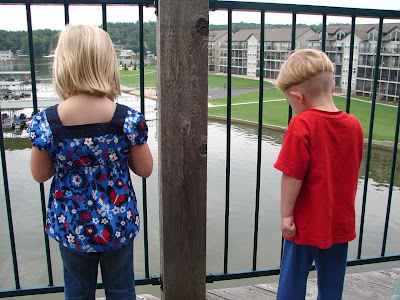 They spend a lot of time on the patio over looking the lake, watching for fish and ducks and turtles and snakes…and locking each other in and out of the sliding glass doors. 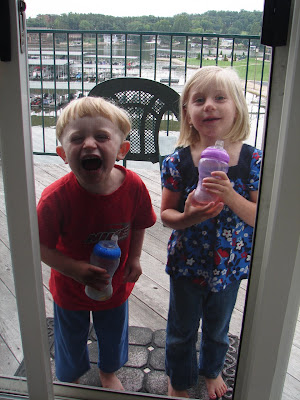 Here they are actually smiling together, but the other day at the Space Museum in the Science Center there was a real dog fight over the stuffed space shuttle. Jesse was endeavoring to build it and, well, Esther was trying to destroy it. True to the male-female stereotype, Esther dominates Jesse verbally, but he, though three inches shorter, is superior physically. The ensuing fight could be heard in outer space. 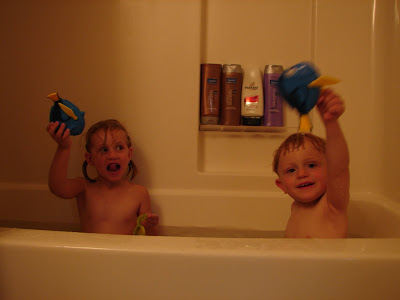 Things have quieted down considerably since we settled into the condo. One secret to peace is making sure there is two of everything. We went to a thrift store and found a big bag of mixed happy meal toys. Thankfully there were several multiples. Here they are in the bath with TWO ‘Dory’ fish.
Every show needs some humor, and ours is no exception. Recent quotes from the contestants and others on set that have kept us laughing:

Esther (looking into our bedroom):”Is dis where you sweep?”

Benjamin calls the bunk beds in his room “Bonk Beds”. I overheard his theory behind the name – “They’re called bonk beds ’cause if you fall off the top bed you bonk your head”.

Stay tuned for more next week…