Our campsite, chosen with the help of our neighbor, was 1/4 mile from the road, up on the highest meadow on our property. Here the meadow wrapped in fat “L” shape around a point of trees (hereafter referred to as ‘The Point”), which contained the remnants of an ancient apple orchard, and many middle aged maples and ash trees, doing a good job of shading out the apple trees and making the woods their own. Just inside the boundary of the tree line, a clearing had been made, simply by sawing down one giant old maple. This was done in preparation for our arrival by a neighbor with a large chainsaw. Here would erect the tipi.

Saturday morning was bright and crisp – a welcome change from the previous day’s gray skies and sleet. The boys, Joel and Jordan, helped Dad unload the tipi poles and lug them to the clearing. Next came the pieces of the plywood floor, and the 2×2’s that the floor would be screwed to. Most of the morning was spent assembling the floor. Mid morning Mr. Studt (or, Uncle Carl, as us children called him) arrived with a friend of his, Ted, and his two sons. They were tall, lanky boys, just the sort to help with the lifting and reaching and tugging and tying involved in the day’s project.

In describing the pitching of the tipi, I had to refer to the book, “The Indian Tipi” by Reginald and Gladys Laubin. This was because my job that day was to babysit my three younger sisters in the cab of the moving truck. It was a typical early spring day in N.Y. – the sunshine was bright and promising, but the breeze was still frozen, and there was still snow in patches in the shade of the woods. The air was much too cold for a 7 and 4 yr. old,much less 6 month old Anneke, just transplanted from the sunny south. We played old maid and go fish, while mom tried to find essentials in the back of the truck, and the men went to work.

The first step was to select three of the largest poles to form the initial tripod. These were tied together securely about three feet from the tips, then hoisted by a length of rope and the combined muscles of 4 men to an upright position, and the ‘legs’ of the tripod spread out to the circumference of the floor. After this, the remaining 15 poles were set evenly around, cradled in the spaces between the main poles. The men lifted the poles by grasping it in the center, setting the butt end on the ground at the edge of the floor, and ‘walking’ up, under it, hand under hand, until it was elevated enough to set in place. Next, the rope was wrapped around the bundle of poles at the top where they met, to make sure they stayed in place. Joel was sent shinnying up a thick pole to help the rope get snug in place. 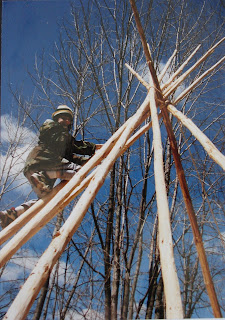 The poles set, the next job was to get the canvas in place. This was made easier with a great trick learned from the Indians. The canvas was folded over and over into a long, skinny triangle about two feet at the base. It was then lashed to the ‘lifting pole’ and hoisted up, up, until it lay in place next to one of the rear poles. One of the men kept his foot braced against the butt of the pole to keep it from slipping. Then it was simply a matter of unrolling the cover, like a scroll, until the two sides of the canvas met at the front of the tipi.

The way the Indians closed the canvas was clever, too. Two long rows of button-hole stitched holes extended from the top of the canvas, down each of the front edges, to the opening for the door. The canvas was generous enough to over lap about 10 inches, so these rows of holes were atop each other. Then a ‘lacing pin’- a strong wooden dowel about 12 inches long, was ‘sewn’ down inside the left set of holes, and up through the right hand holes to the outside of the canvas again. 11 pins held the front of the canvas shut – 9 above the door hole, and two below.

It was the first time we had seen our tipi completely set up, and it was magnificent. The canvas was taught and bright, rising in a perfect symmetry toward the tall tips of the blond pine poles, stark against the blue, blue sky. Mom paused in her efforts to put together a lunch for the hungry men to take several pictures of our new home. It looked so nice – but would it work? would we be dry and warm in our new home? Our first week would answer those questions.

Continued in Episode Four: Our First Night as Indians