Our Week, Part One – An Accident 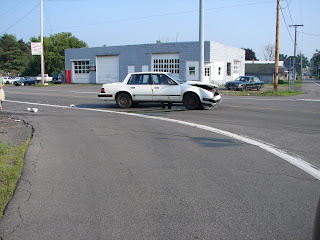 Here is a car with an attitude. Doesn’t it look like it’s frowning?
This is Frank’s car. Frank was following us to HarbourFest Saturday afternoon when a tricky stop light caught him off guard, and an oncoming car caught his car and totaled both vehicles. Nobody was seriously hurt, which we saw was the mercy of God, it could have been so much worse! Jeremy saw the accident in his rear-view mirror, I simply heard the “BAM! Screeeech!!!!!” As the oncoming car whipped Frank’s around in the middle of the intersection, then skidded 100 more feet down the road. We stayed with Frank for two hours while the police made records, the fire and rescue cleaned up, until his parents picked him up, and then went on to the fireworks show, sobered, but grateful it hadn’t ended worse.