Of Goats and Heights

How about a little randomness. Any body in the mood for randomness? I am, so hold on to your hats.

I have a new nickname for Claire. Don’t know if it’s gonna stick, ’cause planned nicknames rarely do – it’s those random, goofy, ‘where did that one come from?’ ones that last the longest. (like my sister, Duck. We have called her that since she was two. Seriously – all the time, and it wasn’t ’cause she quacked). I’ve decided an appropriate name for my girl-child would be Goat. (What is it with the animal nicknames?) As in, Mountain Goat. 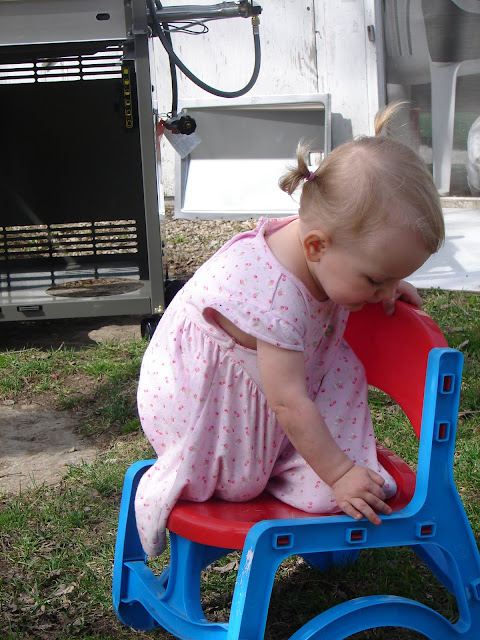 Skirts get in the way of climbing…

This girl is a climber, and it’s wigging me out. Pardon the slang. I told you I was in a random mood – maybe even a weird, don’t-let-me-go-out-in-public mood. She climbs everything and the stress of this is beginning to wear on me. Oh, her, too – you should see her! Friends and family will attest that she always has a new bruise on her forehead. We have a bloody bang almost once a day now. I don’t usually freak out about this kind of stuff ’cause I’m just not like that. In fact, I let my kids take risks that make the people behind us gasp during Church. No one would call me overprotective, but I have taken to putting Claire in her Johnny-Jump up even though she has practically out grown it just to give us both a break.

The injuries tallied on her small person today include two bruises of varying shades on her forehead that are several days old, a bruise and a scrape on her chin from yesterday, fresh gravel burn on nose, forehead, and upper lip from a face-plant this morning, one skinned palm, a nicely scabbed-over wound on a tiny finger, and, just noticed yesterday, a purple toenail (so she could match Brother, no doubt). The highest she has gotten is the back of a toilet. Yes – the back – the tank thingy with a lid. She was standing, too. Mhmm. I believe it’s time for baby gates and restricting her to ‘safe zones’ within the house where there is nothing to climb on. I don’t have to worry about getting excersize, just keeping up with her is plenty (probably too much, but what ya gonna do?).

Nevertheless, she is a happy baby girl, and never happier than when she has reached a summit (be it coffee table, kitchen table, or highchair). Perhaps she will be the next one to break a record climbing Mount Everest.