Of Forks and Thyme

The first few times I ate at a white table-clothed, multiple-fork establishments (as I classify 4 or 5 star restaurants), it was not with family nor close friends, so that may have contributed to the cool and unfamiliar sensations surrounding me. I felt like I was swimming entirely out of my depth, yet in a fish bowl. I was positive everyone was watching me and would be sure to conclude that I had been raised somewhere back in the hills. (Which I was, but that is beside the point)

I began to relax only when I realized that this was supposed to be fun – the maitre d’, the waiters, the chef – they were all here to make me happy. I decided to give them a fighting chance and sat back and enjoy myself. That’s when the waiter suddenly hitch my chair up to the table – with me in it! After I got over my surprise at this thoughtfulness, I again took a deep breath and made every effort to look casual and comfortable. I started to panic again, however, when our smiling waiter made as if to spread my napkin on my lap for me. That was going to far! Was he going to tell me which fork to use next? I was desperate that he not spoil my opportunity to demonstrate that I did have a little class. (My parents had taught me the rule – ‘work from the outside in’ – you start with the small fork.) Finally, he disappeared into the kitchen, promising to come back for our orders momentarily.

Ordering is always a challenge for me. I have trouble at Taco Bell, people. What do you do when the menu doesn’t have pictures – or prices?! You get what everyone else does. I ordered a mimosa, “without the champagne, please” imitating my hosts, and sat back nervously. I was relieved when it came out to find that a mimosa without the alcohol is simply orange juice in a long-stemmed glass. Phew.

This was Houston’s most renown Steak House. I’ll let you guess what we had for dinner. I can’t remember. I do remember dessert. That was the really fun part.

As my hosts had continually pressed me to order just what I wanted, and I was getting used to it, I decided quite quickly on Crepe’s Suzette. If you ever have the opportunity, order the Crepes Suzette. It’s usually assembled and lit on fire at your table! It is just an added bonus if it’s as tasty as mine was. Lighter-than-air, almost-not-there French pancakes oozing sunshiny puddles of mandarin oranges, topped with vanilla ice cream that’s melting into perfect syrupyness after its trial by fire…

O.K., so maybe I did enjoy myself…

Then there was the time I sat next to Jeff at the catered dinner celebrating our county’s bicentennial. (His father had got us invited for promising to dress in authentic costume from 200 years ago.) We were assigned to greet each guest as they entered the ballroom, some of us using our best English accent. We had our picture taken with the senator, but the real highlight of the evening was the dinner… 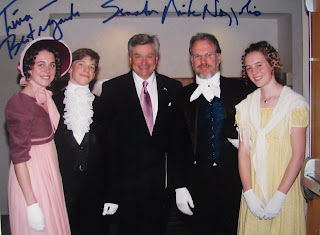 A different area chef was in charge of each course, and it seemed like they were trying to outdo themselves and each other. The main course came out with such an excess of garnishes, it was as if the chef was trying to give us each our own personal herb garden. The chives grew 8 inch straight out of the mound of potatoes, reminding me of a sail as the plates tacked across the room to our tables in the hands of the waiters. The roast duck breast was delectable (at least, until I found out what it was). I was just wiping up some potatoes in its gravy when I glance over at Jeff’s plate.

He had no garnishes. Or, if he had, they were gone. leaned over, whispering ’cause somebody was giving a speech –
“Jeff, where are your garnishes?”
“My what?”
“Your herbs – where’d they go?”
“I ate them.”
Ahh, the joys of owning superior knowledge.
“You’re not supposed to eat them, silly!”

As the speeches droned on, Jeff willingly became my entertainment for the evening.
“Watch, I’ll eat Anja’s, too!”
“Jeff – don’t!” The clump of thyme he snatched from Anja’s plate was large enough to be clipped into a topiary. I steeled myself against my rising mirth as he shoved the small shrub into his large mouth and chewed, and chewed, and chewed…and swallowed.
I tried so hard not to laugh. I really did.