Life with a boy…

Shortly before Christmas, it became the fad around here to help Mommy with the housework. Despite the fact that he gets his fingers flicked consistently when he even thinks about touching the toilet, the boy threw caution to the wind and actually cleaned it for his mother – thrice in one week. 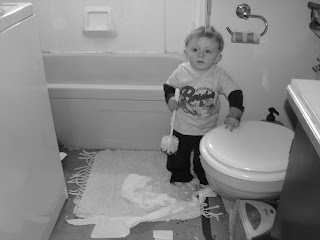 Yes, that is an entire roll of toilet paper spread on the floor and stirred around to a pulp in the toilet. And see how much water is on the floor? It’s beaded up on the rug…I was extremely grateful that I had cleaned the toilet myself not two hours before…but he still got a bath. (Despite the fact that he had just had a bath an hour before this incident.) 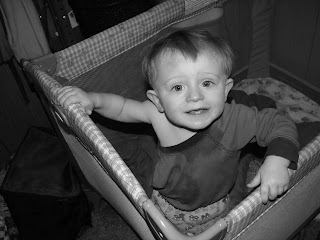 This is the kind of predicaments he gets himself into. Do notice the drool-dampened shirt. Or should we say, soaked. 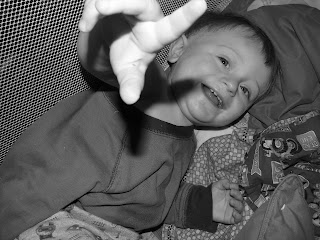 “Mother, quit taking pictures and get me out of this thing!” 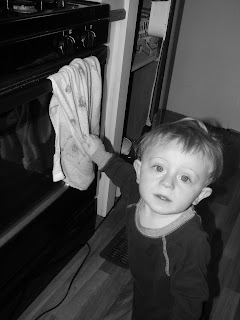 Then there was the case of the kitchen cloths. The boy had developed the habit of yanking the dish cloths to the floor each time he passed through the kitchen. He treated it like a solemn duty. Until I safety pinned the edges of the towel. You should have seen him tugging at it wiht all his baby might. See the confusion in his eyes? 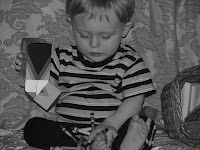 This was his favorite past time before Christmas – dump the crayons, then try to put them all in again. Over and over.
I am glad to say that he has been so enthralled with his new toys that he has not cleaned the toilet since Christmas. He has been surprisingly low-maintainance! 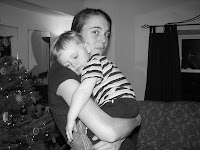 We are both still tired at the end of the day…