As fellow poets, Anja and I have coveted a set of Magnetic 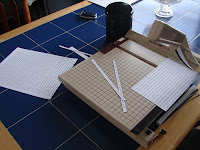 Poetry (or, MagPo) ever since we first saw one. All those little words literally at your fingerprints, just waiting to be made into a poem! Of course, MagPo has never been in the budget, prompting me to try to make my own – of course! My first try was handwritten words on a sheet of magnet – cut out by hand. The results were far from professional, which certainly stinted inspiration. Add to that, our fridge at that time was tucked in a dark alcove under the stairs of our cabin on the homestead – trying to write poetry was difficult. 🙂 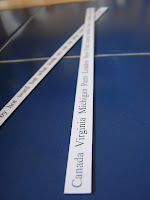 Anja announced a few months ago that Magnetic Poetry was on her birthday wish list, and I, too, had a strong desire to see poetry happen on my shiny new black fridge, so I decided to try again. I did a search online and found I wasn’t the only one who had tried to make my own. This site and this one had a lot of helpful information, including a link to the 1000 most common words in the English language, to get me started. After having no luck at Staples locally, I ordered my magnet sheets from this company.

Making a word list was definitely the most enjoyable step. It was fun to list all the family names and nicknames, as well as a wide variety of adjectives and verbs and exotic nouns, imagining the fun poems Lee would create. 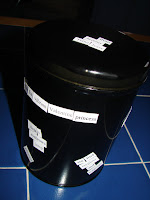 Getting the magnetic sheets to go through the printer was the tricky part. Jeremy stuck with it, though, and we got it to work on the printer up in the office. Then I used the big paper cutter to cut the lines of words into strips, and scissors to divide the individual words.

I found a metal tin at the thrift store, soaked the label off, and Jeremy used some leftover black appliance paint to give it a new look. I put most of the words inside (they looked so yummy all stuck against the sides!) and a few on the outside…

She loved the gift, and has already created some awesome poems.

I am still working in our custom list for our fridge, but I have made a few poems so far. Here is the one I made yesterday… 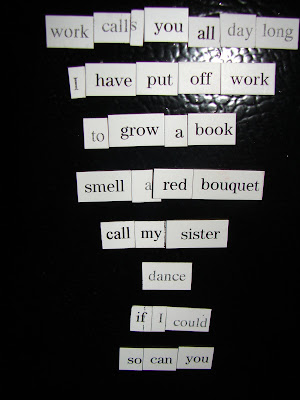 Edited to add Information…
I used a double space between words, and 1 1/2 spaces between lines. Jeremy adjusted the margins on the computer and printer so that I could make the most of the magnetic paper. It is expensive stuff, and I wanted to fit the most words I could on each sheet. The store bought magnetic poetry actually has a bit more margin, but I thought mine were ok.
As for my word list, I decided to start with the 100 most common words, then I began listing proper nouns such as Anja’s family members, places she has traveled (or wants to), then a few animals, colors, and so on. I actually sat down with a tablet and wrote down the alphabet, and tried to think of a variety of words (adjectives, verbs, prepositions, adverbs) that started with that letter. Finally, when I was typing the words into a word document, I added a bunch of small words, letters, articles, and suffixes (in, the, and, ing, re, s, etc.) at the ends of the lines to make the most of my margins.
A store bought magpo kit has 200-300 words, I believe. The one I gave Anja has over 700. I told her to keep a list of any words that seem to be ‘missing’ or that she may need more of.