The End of an Era

The other afternoon, just as I was falling into a much needed state of Lowered Consciousness (otherwise known as Sleep) I felt a little pat on my shoulder. Even before I rolled over, I knew what had happened. The Boy had climbed out of his crib. All by himself. When he was supposed to be sleeping.

It was the end of an Era. I can no longer toss him in his bed and go off to my own room knowing everything will be under control while we all take a nap.

We also broke the Passy Habit last weekend at Whiteface, which is contributing, I am sure, to his restlessness in bed. Usually the passy has a sedative effect which lulls the Boy into is normal 3 hour afternoon nap. But since we lost it and decided not to pull out The Spare, he has completely skipped his afternoon nap. How can he go from sleeping 3 hours to not at all???? I ask you.

So, I haven’t had a nap for days – that’s a habit I’m not ready to break. I’m also sneezing and fighting a cold. So I guess it’s good that we’re having some down time this week.

I dropped Jeremy off at his rendezvous spot yesterday for his ski trip to Bromely in Vermont. He is taking part in a Level 2 Prep Clinic along with 3 of his ski pals from ARISE. So, Jesse and Claire and I are on our own for a couple days, kicking back and, well, do you honestly want to know what we’re doing with our time? Jesse is watching “Horton Hears a Hoo” (his new favorite movie), Claire is cooing and batting at her toys on the couch, and I, well, I was catching up on friends’ blogs. Then I decided to catch you up on here, and now I’m heading off to the recliner to work on finishing a long-over-due project.

Eventually I will get pictures up – not having much luck lately but we’re working on it. Meanwhile, here’s the latest CuteBabyClaire picture…Jesse loves to make his dolly do everything Claire does – including sleeping in her bed. I found Claire with this doll nearly on top of her when I went to get her up from her nap the other day. 🙂 She didn’t seem to care! 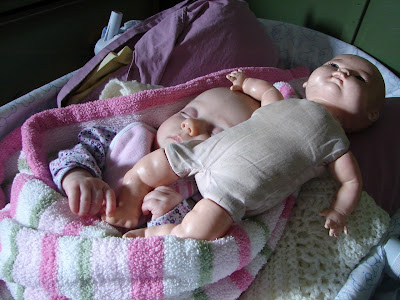