A Bird With Teeth 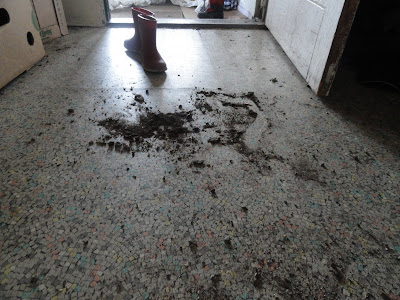 The above photo shows the amount of dirt that came out of my daughter’s clothes and boots after a morning of playing with her brother.

I had given them baths (first mistake), dressed them, and sent them outside to play while I got ready for us to go out. I rushed around inside getting ready to go, and didn’t check on them quite as often as I should have (second mistake). Sometime between my survielance glances out the kitchen window and my reconisance trips onto the back porch to check on them, brother found a way to entertain himself with his sister and multiple handfuls of dirt.

It was nearly time to go. I pulled lunch out of the oven and called them to come inside to eat. Jesse hesitated. First clue. Made excuses. Second Clue. Suddenly became very helpful. Third Clue. (He knew he was gonna be in trouble). I heard them come into the mudroom (aptly named) and heard him very solicitously helping his sister take her boots off.

“Mom, Tay gots lots of mud in hers shoes!” He announced.

I peeked around the corner and gasped. My princess was filthy. My beautiful little daughter was covered in dirt. I began to undress her, realizing we were gonna be delayed by another bath. I took off her hat and gasped again. Her scalp was coated with dirt. That’s when I knew I had a culprit. My princess, dirt lover that she is, could never have done this to her own scalp nor got her hat back on to cover the evidence.

“Brother? Did you do this?”

We are in that ‘let’s see if a lie works as good as the truth’ phase. Thankfully, he’s not very good at lying, so we’re pretty good at finding him out. He hemmed and hawwed and denied it up and down, but I had the evidence right before me. I headed into the bathroom with Claire and told Jeremy to have a try at getting the truth. That’s when I overheard this statement, his most creative lie to date:

“Maybe a bird flew over her head with dirt in his teeth and dropped it on her!”

We were late to our destination, and I’m still combing dirt out of the Princess’ hair.