Because I took the weekend off of social media, I’m sure you all are dying to know what I’ve been up to.

Because I took the weekend off social media, I’m especially chatty, with all kinds of randomness bubbling up inside of me, begging to be blogged, so I shall oblige you.

Hayley gave me the idea for this ‘analog weekend’ and I’m ever so grateful for her inspiring leadership, as keeping social media in balance is a constant struggle for me. Many of you know I regularly take Wednesdays off the computer, but that mid-week break often just sends me back Thursday with even stronger urges, anxious to get caught up and numb my withdrawal symptoms. A whole weekend off, however, has truly allowed me to decompress, detox (not that ya’ll are toxic–it’s me and my urges, dontchaknow) and get my perspective solidly in focus again. This analog weekend is gonna be my new thang, I’m just warnin’ you.

Let’s see–what did we do with ourselves? I had the downright sensible idea to follow my own advice from my own book and sit down and plan a nice chunk of the next month’s menu and then made a grocery list from it. I don’t menu plan often enough. Oh, man. Even if I just go real vague, as in ‘these are the 7 dinner ideas for this week, which I will serve up in any old order I wish’ kind of menu plan, it brings such relief to me to know someone has put in some amount of thought toward what this family is eating in the near future. I really don’t like that that someone has to be me, (I’d much rather it be my sister, who always has great ideas on what to eat next), but at least the deed is done. And suddenly I’m excited about cooking again, and the next week feels, in a tiny way, like a vacation. Yup. I love menu plans when they’re done!

Pioneer Woman helped me out on this one. (I said I took the weekend off social media, but not Pioneer Woman, ahem.) All I had to do was browse the last few pages on the cooking section of her blog, and I had 3 new dinner ideas. Add a few regular favorites on to the list and viola! A week’s menus. Glory be. The hardest part was getting the printer to print the recipes, but that’s why I keep Jeremy around. (Not the only reason, of course.)

After Jeremy got off work Sat. afternoon, he packed us all in the car to get us some vitamin D. Yes, the sun was actually shining, and you didn’t need thermal underwear and ski clothes to venture out in it. Just light jackets and sun glasses. Hello, spring!!! I love you.

I also loved the exquisitely relaxing feeling of having someone else plan the agenda, get the kids in their car seats, and do the navigating and driving. It’s been a long winter of me doing almost everything with the kids on my own–church, grocery shopping, library, etc., with the Car Seat Workout at every stop.  So, having my husband plan a family outing (even if it was only to the grocery store) totally made his shinning-knight-armor sparkle even brighter.

Oh, but in true Jeremy-style, the trip was not merely utilitarian. We made several stops that had the kids shouting with glee. We stopped at the Falls Overlook (higher than Niagara Falls! Totally a reason to come visit the Fingerlakes!). We stopped at a park. We stopped at the mall and the kids got to climb on tractors that were on display. We stopped at another park. And THEN we went grocery shopping. This man knows how to plan a family outing. Oh, and we got home to leftover pizza he had bought the day before, so I didn’t have to cook either.

So, Saturday was good. Saturday night was not so good, with children-who-ate-salty-pizza-and-then-drank-too-much-water going to the bathroom way too many times during the night. And because my children are 6 and under, I was up with them. (I know, I know. I keep telling myself and them they are old enough to go alone, but apparently not.) I think it was the 2 am run when I collapsed back into my bed and slammed my head into my husband’s elbow, which likes to sleep up on his pillow with his head. I love that man, but he has very pointy elbows! Oh, my word. I have an insane bruise on the side of my head, which, sadly, I can’t show off because it’s covered with hair. (dontcha hate when you can’t show off your bruises?)

Sunday was when I really started to feel better. (Did I mention that last week was hard and draining, and I really, really needed this weekend?) I don’t know whether it was the vitamin D, the lack of wasting time on my phone, or the chance to worship and fellowship at Church, or all of the above. But Sunday afternoon was the way Sunday afternoons Should Be. We cooked lunch and cleaned the kitchen together while the kids played outside (and got all muddy). I started Sunday Night Stew simmering on the stove. (This had an extra big ‘right’ feeling about it because Pioneer Woman was explicit in her direction that this stew should always be eaten on Sunday Nights. I, of course, obeyed. I was always a compliant child. But seriously, it really helps the menu plan when a recipe tells you which night to serve it. Thank you, Ree!)

And then I lay down on the couch for the rest of the afternoon and read Shauna Niequist. No, not her latest book that everyone else is talking about and posting photos of them reading and cooking recipes from. Nope, I’ve always been a late bloomer, late to the party, behind the times, after the fad, way–ok, I’ll stop. I just this month got my hands on her first book (having been informed by my sister that they MUST be read in order to enjoy them the most), and only that afternoon finally gave myself the time to submerge myself in it and see what everyone was raving about.

Ahh, yes. She is an artist. A writer who has done the work. That hard work of turning one’s own life and heart and lessons learned into words that inspire another. Reading her book reminded me that even thousand-word-photographs should not get in the way of the art of story telling.

And that is also what this analog weekend taught me. Even the excitement, inspiration, and entertainment of the virtual community of social media should not get in the way of old-fashioned joys and pleasures, like soaking in sunshine, reading a good book, and letting our minds wander where they will instead of a digital stream carrying it hither and yon.

I feel like I’m heading into the new week a better writer, a better wife, a better mother. I’ve remembered how to be still, and Who to be still with.

I highly recommend the experience.

Oh my word. This post is over 1000 words. Pardon me! I feel like I just belched over-loud and over-long in your ear. Maybe I should have just shared a few snapshots? Maybe I’ll do that anyway… 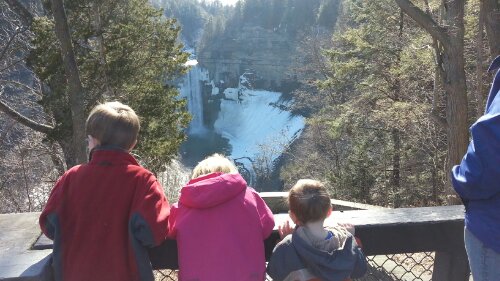 The Falls Overlook (in warmer weather, we will take the trail down below that brings you right up next to the falls!) 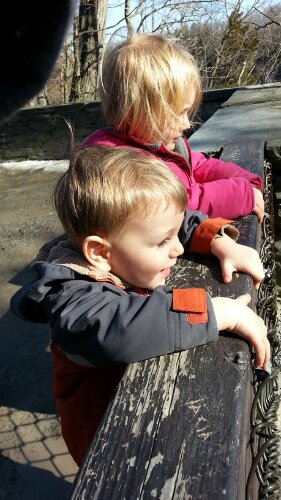 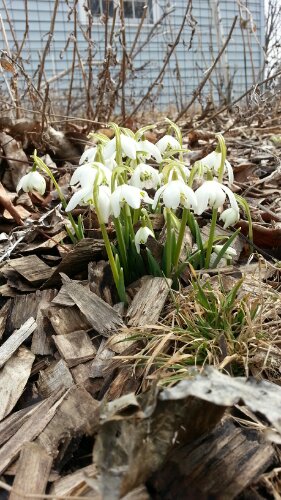 These snowdrops get me every year–they always bloom sooner than I expect any responsible flower to show itself. These literally had snow capping them until yesterday’s sunshine. 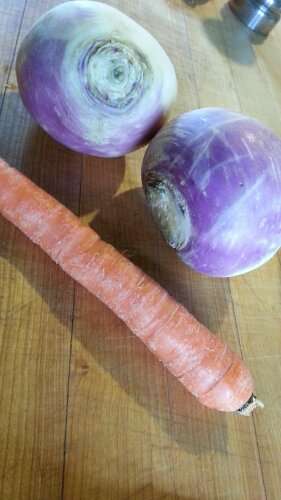 the Sunday Night Stew called for turnips. I don’t know if I’ve ever bought turnips. But we grew them on the homestead, so the smell when I sliced them open was…stunningly nostalgic. And diced small and stewed soft for hours in tasty broth? No one, and I mean NO ONE noticed them. My whole family at turnips for dinner last night. I feel…sneaky. And delighted. 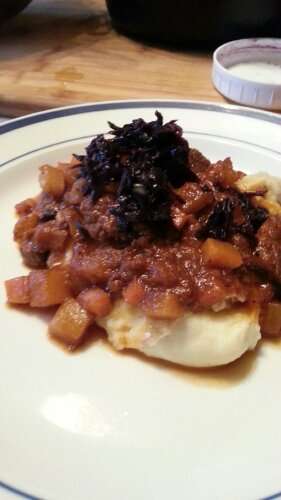 (Beef stew loves sauerkraut, dontcha know!) My whole family was blessed, especially my man, that I went to the effort to make something nice for Sunday Night Dinner. I should do this more often. Usually Sunday night is slim pickings at our house.

What do you eat on the weekend? I’d love to hear how you plan or prepare so that the weekend contains some restful moments for you, as the homemaker. And how was your weekend?