An Alternative to Superwoman Syndrome

I’m sharing with you the path the Lord is leading me on towards freedom from the sin of anger. I’ve not arrived yet…but can’t deny He’s working. Catch the whole Freedom from Anger series here.

Last time I talked about how I have started to recognize some of my anger triggers—the things that start the pot simmering, and, when added together, result in my blowing my lid.

It’s interesting to note that I seem to always blow up about the smallest thing. Spilled water. Poor cell phone reception. Laundry in the wrong place. I mean–good grief–what is my problem?

My problem is I let these things build. God is teaching me I need to deal with them as they come, running to Him at the least hint of negative emotion, rather than trying to deal with it myself and only using His grace for the ‘big’ stuff in life. I need Him every moment, oh yes. No denying that anymore.

So, He is teaching me about what to do when  trigger comes, but He’s also given me another soul-refreshing insight, like an oasis on this sometimes-dreadfully-parching journey:

He has told me that it’s ok to try to avoid some triggers. To map a path around them, to stop before I come up to them, to even run the other way.

Oh, my goodness. That seems like the chicken’s way out, doesn’t it? I mean, I should be strong enough, right? I can handle something little like a bit of mess on the floor, hungry kids, or being late to a park date, right? 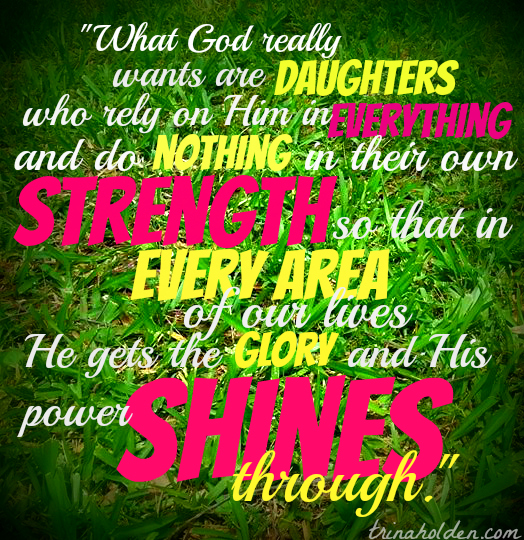 Running Straight Toward a Fracture

This truth was impressed on me last month when I got it in my little hare-brain to run another 5k. (Oh, yeah? Did you know? Last year I officially became a wanna-be runner, completing not one but two very slow 5k’s. Oh, yes. This was very good for my superwoman ego. Not so good for my humility, can you tell?) If you’re new around here, I shall explain one very key reason that this is a crazy idea: I’m currently 5 months pregnant. Here’s another great reason: I haven’t run since my last 5k, 7 months ago.

So, yeah, I got it in my head that I could do a 5k next month, that I should do a 5k next month, so I bought some running shorts that fit this month’s waist line, set my alarm for 6:30, and went out and started training. (I swear by the couch-2-5k app—walk, run, walk, run, building up the amount of time you run each day, sweet female voice prompt telling you when to stop and start so you can just concentrate on panting and putting one foot in front of the other.)

Day 2: I was so sore and was limping and all that, but I kept telling myself it was awesome and I’d feel better soon.

Day 3: I again walked/ran 2 1/4 miles, pushing through the soreness from Day 1, but man, it hurt. Especially my left foot.

Day 4: The initial soreness from Day 1 had finally wore off, and I was hopeful Day 5 would be the turning point to enjoying the training process. Except, my left foot was hurting more than ever, and I realized this wasn’t just your average sore muscle.

So, I called my friend and fellow runner, Kristina, who had had some similar pain in her foot last year. And she told me what the doctor had told her—”You’re headed for a stress fracture if you don’t take it easy.” She told me to keep it wrapped and forget the whole idea of running a 5k next month.

What a relief it was to be given permission to take it easy.

I like to think I am a strong woman. As in, strong enough for This, and That, and That and That. I think it’s called Superwoman Syndrome in psychology textbooks. (I’m just kidding on that—I’ve never seen a psychology text book. Can’t even spell psychology—thank you, spell check!) Commitments, expectations, dreams, goals, tasks, and responsibilities pile on me until I fracture (usually in the form of a verbal explosion aimed at my *usually* innocent children). I’ve been telling myself my problem is I’m just not strong enough, and I should be able to handle the stress if I just Try Harder. 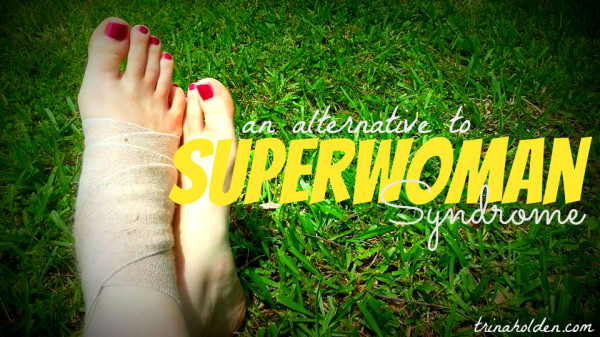 But this month the Lord gently released me from that expectation of myself, and I have begun to see that pushing myself through the stress of facing multiple triggers each hour of my day may be the last thing my soul needs.

Instead, my soul needs splinting. My spirit needs rest, and permission to avoid as many anger triggers as possible. Maybe just for a season till the weakness heals, maybe for long term because He never called me to be Superwoman.

So, along with dealing with triggers when they pop up, I’m also learning to strategize to avoid them. Next time I’d love to share with you a few of my main triggers and what I’m doing to navigate around them…

Have you fallen in the trap of thinking you should be stronger, instead of embracing the fact that He hasn’t called you to be superwoman?